While I am mainly a legacy style player, meaning that I like to stick to one sim family for several generations, I always get restless if I play in the same area for too long. That’s why in The Sims 3, I often uprooted my legacy family and moved them to a completely different environment, and I appreciated the diversity of all The Sims 3 worlds. Naturally, once Newcrest has been announced I couldn’t wait to get my hands on it to give my sims a bit of a change of scenery. Come join me on a first impressions tour of the new world!

The map view of Newcrest shows us the world is divided into 3 different areas, which is already more than we have gotten with the worlds that came as paid content. I commend EA for releasing this as a free update, as it shows they do listen to the simming community (and lets face it, is probably going to help them with the sales of the Perfect Patio Stuff pack coming out next week). I’m going to refer to each of the neighbourhoods within Newcrest in the order I visited them in for the purpose of the review (see image above). 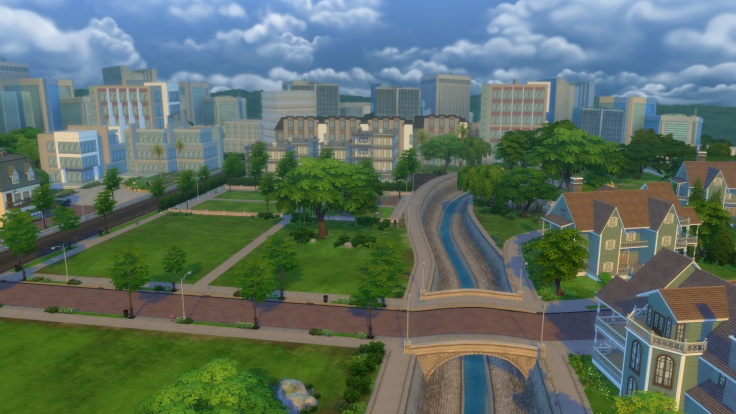 The first thing that struck me when I loaded up Neighbourhood 1 was that we are definitely getting closer and closer to the city. Some of the background buildings seem very reminiscent of apartment style buildings – perhaps this is a hint of a city life expansion on the cards in the near future? (Note, I firmly stand in the semi-annoying toddler fan group, meaning that my preference would be a family-oriented EP before anything else, but let’s be honest… I’m bound to jump on whatever expansion pack comes out next just the same).

To me, Neighbourhood essentially looks like an extension of Magnolia Promenade. The area is lovely and looks ideal for a commercial district, but it doesn’t necessarily add much of a new feel. Considering the minuscule size of Magnolia promenade, an additional neighbourhood with a similar style is not necessarily a bad thing though. I also do enjoy the canal flowing through this neighbourhood, since it adds more character to the area – in spite of it mainly being just for show.

Neighbourhood 2 is probably my favourite addition to the game. The area combines a a park-like region with the backdrop of skyscrapers – Central park anyone? I feel like this neighbourhood is the biggest change of scenery and look forward to placing hip urban developments in the area for all of my young and trendy sims who are way cooler than I am.

I also feel that the second neighbourhood features more details than the other two, such as the adorable boat in the picture above. The only downside is that there’s no way of getting your sims close to them, but I still enjoy the new backgrounds. On the other hand, I have the impression that the backdrop areas seem to get more blurry in Newcrest than in the existing worlds, but I’ll have to play in the area a bit more to be sure.

The skyscraper-free area of Neigbourhood 2 reminds me of the Willow Creek neighbourhood where Oakenstead and Cypress Terrace are. Considering I find that particular neighborhooud the richest and most interesting area that came with the default game, this can only earn brownie points with me. 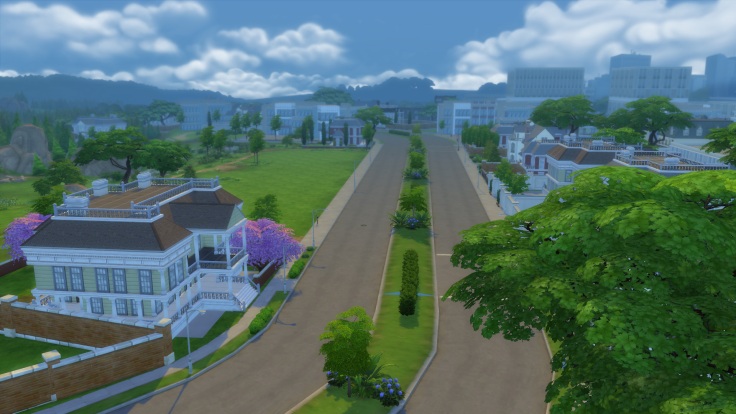 Finally, we get to Neigbourhood 3. Again, high rise buildings are prominent in the background, but this area includes a lot more foliage than the previous two we visited.

It sort of feels like Magnolia Blossom meets Sims 3 Into the Future, and the emphasis on nature so close to the big city is an interesting concept. My initial thought when I saw the neighbourhood was that there was a lot worth exploring and I wouldn’t be surprised if it even had a secret passage to a new hidden lot.

However, on further inspection I realised that your sims can only venture into a small portion of the area and most of the park is indeed just a backdrop once again. As I said, I am always on the lookout for a slightly different scenery, but I can’t help but feel that minimising this into scenery only is a missed opportunity.

All in all, I am quite pleased with the new world though – the sheer fact that all of this content is available to everyone for free makes it hard to complain. I do hope that we will get more diversity in future world themes to allow players to have a truly different experience, even if this means the experience is paid for. Until then though, I am grateful for having the possibility expand without being restricted to the same old lots I’ve played with before.

Side Note: I have not touched on the fact Newcrest is a fully blank slate. In previous Sims games, this would have been a serious issue for me, as I am by no means a great builder and I am only in the mood for building every so often. With the brilliance of The Sims 4 gallery and EA’s inventive idea of inviting the best of community builders to create homes for the world under the #buildnewcrest tag, this is no issue at all. Of course one can think it’s a sneaky move of EA to put all of the responsibility of populating the world with houses on the community, yet you can’t deny the genius of the idea nonetheless. Sure they made it easy for themselves, but with having such an elegant solution at their disposal (and getting two birds in one stone in terms of the community promoting the world’s release), who can blame them? I for one am completely happy with the solution, and am heading to the gallery to download some of the homes tailor-made for Newcrest as we speak.

What are your thoughts on Newcrest?