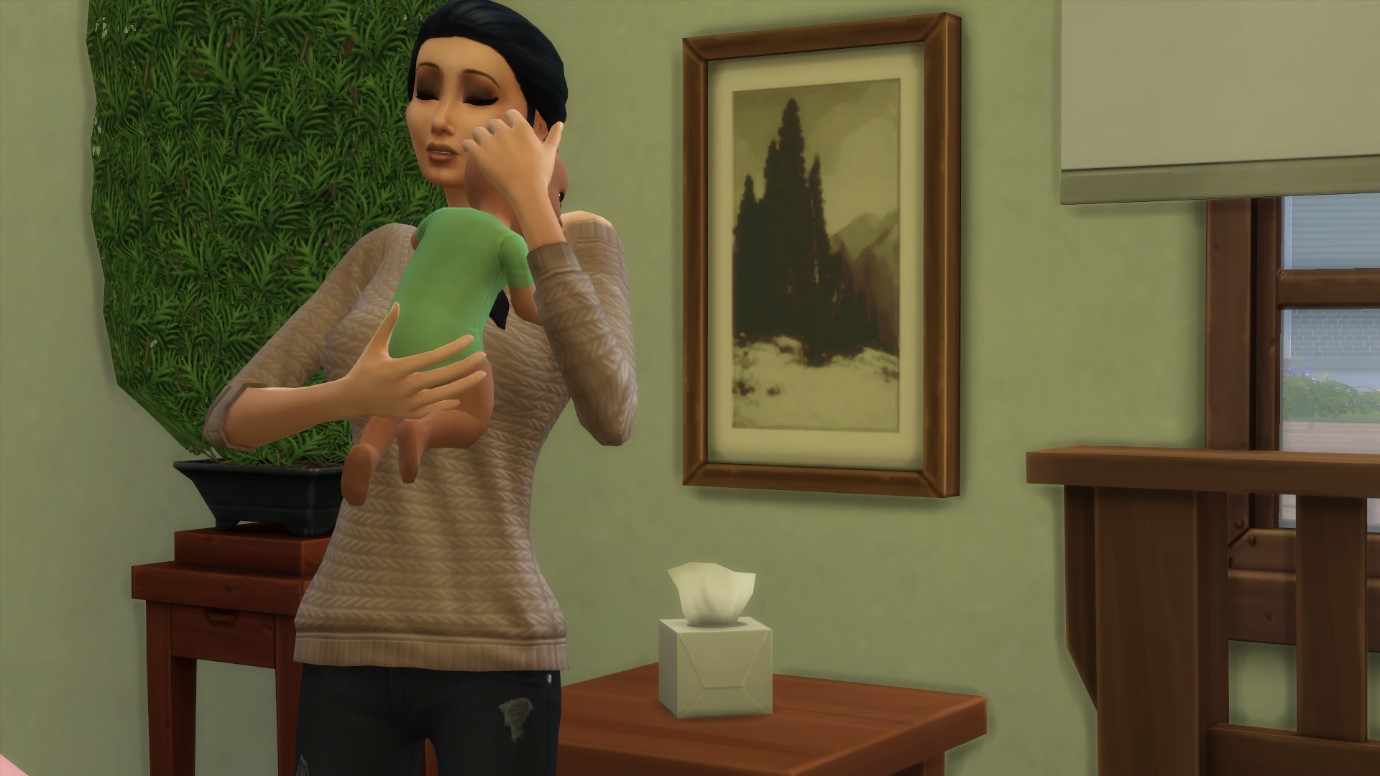 Happy news from the Agustin family: Erica gave birth to a beautiful boy named Skylar (game generated name, and not one I personally would have picked, but I can see Erica naming her child that).

Not sure why they’ve put him in a pink bassinet, but oh well. Isaac seems to be overwhelmed.

He falls in love with his first grandchild instantly.

Erica: “I’m really hoping the baby will help dad get on board with us, and finally be civil with Daniel.”

Lilah: “That would make sense.”

Lilah is always so polite. I don’t think she’s disagreed with anyone since we met her.

Isaac walks into the room and sees Daniel. It’s the first time he’s been over when his son-in-law isn’t at work.

Isaac: “Oh plumbob, give me strength!”

Daniel: “So Isaac, how are your jellybeans today?”

Isaac: “What are you talking about?!?”

Erica sighs. It was looking so promising… 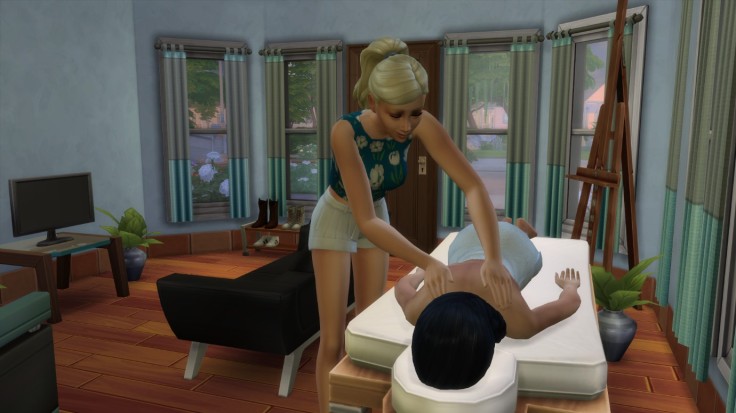 Lilah wants to help with the tension so she offers to give Erica a nice calming massage. She’s such an amazing lady. If Peter doesn’t marry her, I will!

Meanwhile, Daniel attempts to patch thing up with his father-in-law.

Daniel: “I just wanted to say how grateful we were for this house, and for everything! I hope… I hope we can try to get on a bit better. For the baby’s sake, and for Erica’s… not to mention the dinosaurs.” 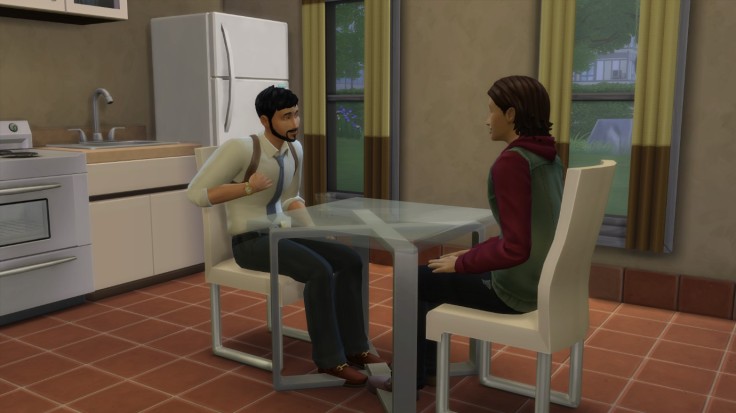 Isaac doesn’t really understand Daniel, but he softens at the mention of his two babies.

Isaac: “Look Daniel, I know you and I will probably never fully see eye to eye, but…”

Daniel: “Oh I know, you’d probably rather see me on a cupcake headed for the Zebra Galaxy rather than in this house. Don’t worry, I feel the same way about you.”

Isaac: “How dare do you speak to me like that! And are you ever going to stop with that nonsense?!?”

Daniel: “You were about to say something…”

Isaac: “No I wasn’t! I said you and me will never see eye to eye, period!”

Isaac stomps out of the kitchen angrily. He runs into Erica in the living room.

Isaac: “This husband of yours! Make sure he’s not here next time you invite me over!”

Erica looks at her father with sadness in her eyes. This never ending circle is not good for her, and it’s definitely not good for the baby.

“Daddy,” she says softly, “I know you mean well, and that you care about me and the baby, but you need to accept that this is my life. Daniel is my husband and Skylar’s father. If you can’t get along with him, you’re not welcome in this house. No matter if Daniel is at home or not.”

Isaac stares at his daughter in awe: “But… Erica…”

Erica looks away: “I think you should go.”

When Isaac leaves, Erica locks herself in the bathroom and starts crying. Daniel tries to go after her to comfort her, but she doesn’t let him in.

He decides to play the guitar for Skylar instead. He shouldn’t have to hear his mother cry.

When Erica finally opens the door, still teary eyed, she finds the baby wiggling his toes as Daniel’s playing his song. She wipes off her tears and smiles. She knows she made the right choice. 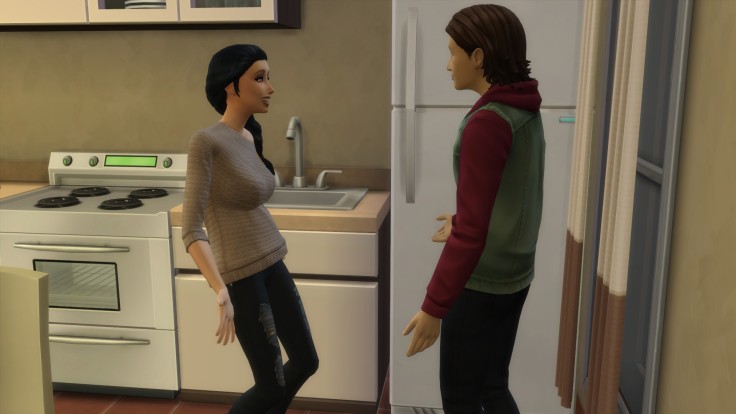 Not too long after, Erica finds out she’s pregnant again. Daniel is thrilled. Soon enough they’ll have enough kids to start a band! 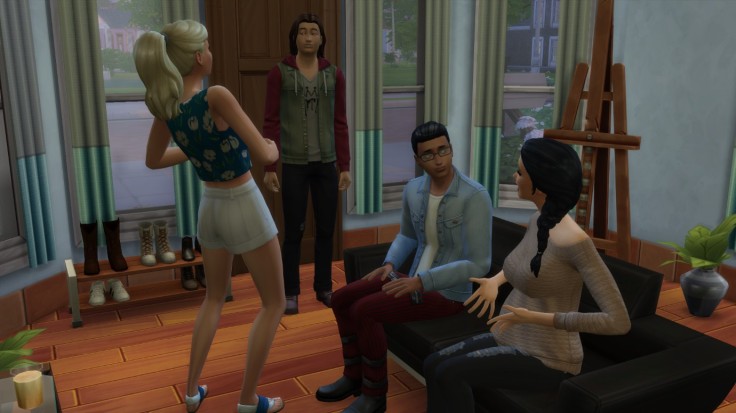 The couple have Peter and Lilah over to share the news.

It’s the first time Peter has seen his nephew Skylar. He picks the baby up. He can’t believe how small he is. What if he breaks him? Maybe he should put him back.

Erica: “Aww Petey is meeting the baby for the first time! I’m sure he’ll be a great father, don’t you think?”

Lilah: “Probably, I don’t know. I haven’t really thought about it.”

Erica: “Is everything ok with the two of you?”

Lilah: “Oh, it’s great! I just don’t really like to plan that far ahead! We like where we are now, we’re still just getting to know each other!”

Erica nods, although Lilah knows Peter’s sister probably doesn’t understand her. Erica’s always been so family-minded. Lilah, on the other hand wants to enjoy the present. Kids are nowhere near the horizon – her and Peter haven’t even woohooed yet!