Well aware that their time would come soon, Peter and Lilah spent most of their last days enjoying quality time with each other and their children, but they’ve still managed to achieve quite a bit.

Lilah had formally retired after their round the world trip, but she wrote several travel guides during her retirement, and had been more active than ever, with daily jogs and yoga fitting into her routine effortlessly.

Peter had also retired from his writing career, but wasted no time jumping into programming, his original passion. He dabbled in making plugins, modding games and doing freelance work, and he even started a proper new career as a tech guru. As an ace engineer, he was only one promotion away from fulfilling his second aspiration and becoming a computer whiz.

Sadly, this was not to be. It was a beautiful sunny day when Peter returned from work the last time. He waved to the world, turning away from his beautiful mansion and even more beautiful family, and closed his eyes forever.

Yenn, Lilah and the maid (the maid? I swear this is the first time I’ve seen her!) all rushed outside.

Yenn did not dare speak to death after their last encounter, the conversation they had had was still twirling in her mind. Could she trust death, the one that was now taking away her beloved father, the man who raised her?

Lilah, on the other hand, approached Grim immediately: “Grim please, don’t take my husband away! After our chat the other day, I was sure I would be the first one to go… It can’t be him! Take me instead, please! I’m ready for the final adventure, let my husband stay behind for a little longer!”

Grim shrugged and continued with the reaping: “I’m afraid it’s not your time yet, Lilah. Your husband is going on the ride first; please try not to be too jealous. I’ll be back for you!”

And with that, Grim took Peter away with him. Lilah and Yenn looked at each other in disbelief. Neither of them said a word.

As for the maid, she disappeared, never to be seen or clean another plate again. 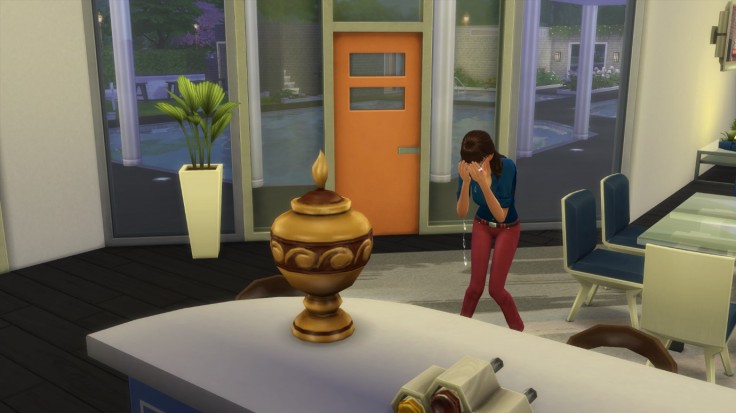 Chell found out about the news as soon as she got home from work, and it hit her hard as well. She couldn’t believe that her father, the man she had so much in common with, was gone.

Fortunately, the other man in her life, Knox, was there for her.

Booker went to his wife Keiko for support, hoping to find similar solace that Chell had been getting from her husband, but it did not go well. While Keiko had genuinely liked Peter, and has bonded with him much more than with her mother-in-law, she had no idea what to do or what to say to her husband.

Lilah and Yenn turned to yoga in their grief. They still hadn’t really spoken to each other, but they were there for each other silently, whilst exercising side by side. Unfortunately, it didn’t seem to help much.

Lilah was still distraught, bursting into tears every time she passed her husband’s urn.

Lilah: “I just don’t understand, Knox… It was meant to be me that goes first, not him. I don’t know what to do without him.” 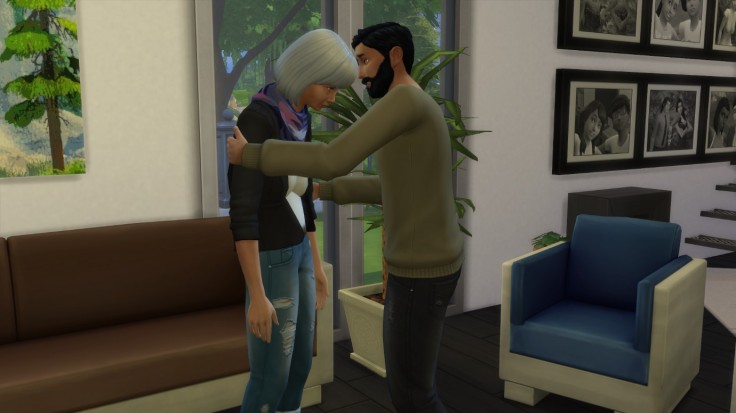 Knox was ready to be the rock for anyone in the house who needed him: “I’m so sorry that you have to go through this Lilah. Peter’s lived an impressive life and achieved so much, and I know that one day, we’ll all join him wherever he has gone.”

The conversation with Knox somehow made Lilah feel a lot lighter. She gazed up to the sky hopefully.

Lilah: “I know you’re there, my love. I’ll be coming to you soon, and then we can travel onwards, together. It will be just like our round the world trip, but longer and further!”

Yenn was still having a tough time. When yoga didn’t help, she turned to slightly more aggressive forms of exercise. She couldn’t hit the punching back as hard as she would have liked, her grief seemed to have taken all of her strength out of her.

Booker walked past and saw his sister struggling. Whether it was his personal trainer job or a poor attempt at sibling bonding, he decided mentoring his sister would be a good idea.

Yenn: “Get away from me Booker, or I’ll punch you instead of the bag, and you can bet your plum I’ll put a lot of force into it!”

Chell understood her sister better. She knew Yenn had been dodging Ethan’s calls since she wanted to dig herself into a fortress of solitude, but Chell wouldn’t let her. She knew Yenn needed a silent companion in her grief, and she was just that for her.