After seeing Keiko interfering with Newton’s love life, I decided it might be a good idea to check up on her. As I suspected, she seemed bored in her posh golden and pink condo. The life she had always wanted was proving… dull.

Perhaps babysitting her grandson would be a good distraction…

“Grandma! You need to hear all about our holiday,” Monty enthused.

“I’d love to,” she smiled at the little boy. “You went to Granite Falls, didn’t you?”

“Yeah,” Monty nodded eagerly. “I saved mommy from a bear, and made friends with snow people! But… it’s spring again now. What happens to snow people in the spring?”

Spending time with Monty tickled Keiko’s childish side. It felt wonderful to let go and be carefree with her grandson, something she had missed out on with her own daughter. They were having a great time… and then Booker walked in. 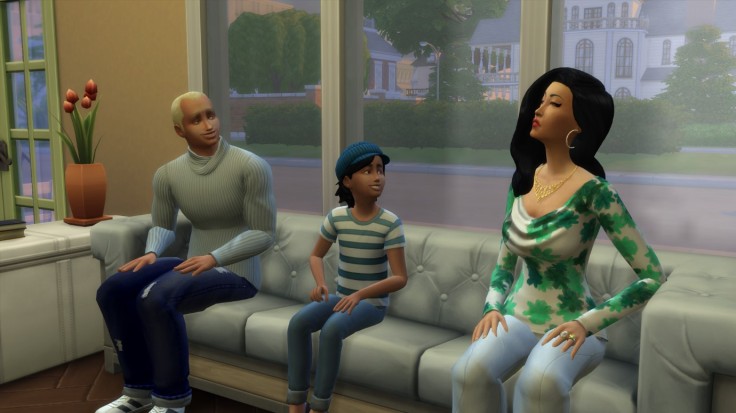 Keiko prickled her nose: “What are you doing here?”

“Do I need your permission to check on my favourite grandson?” Booker retorted.

“I wonder if he’ll think that in a few years’ time,” Booker uttered.

“Monty, why don’t you go bring that toy you were telling me about,” Keiko told her grandson. The boy went off to his and Liv’s room.

“How dare you talk to me like that in front of Monty,” Keiko hissed.

“Oh please Keiko,” Booker smirked, “Do you think you just get to waltz in here and play the magical fairy grandmother?”

“And what’s your approach, the grumpy grandpa?”

Liv got home in the middle of it all. “Mom, dad,” she greeted them, baffled. “You’re both here!”

“I just wanted to pop by and check on my grandson, but it looks like your mother was already here, spreading her venom,” Booker said angrily.

Liv just shook her head. She decided to usher both of her parents out of the house; she didn’t want them bickering around Monty any longer.

“Like I don’t see right through your mask, Keiko,” Booker gave his ex-wife a mean glare.

“You know what, I’m not going to dignify that with an answer,” Keiko shrugged and walked off.

Time to have a look at what Booker’s been up to! 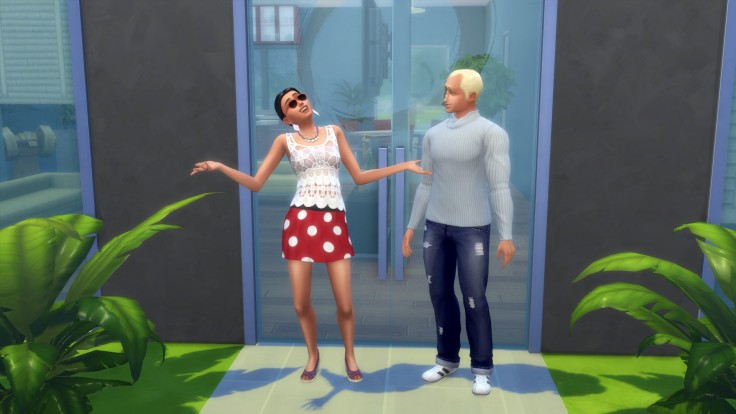 By the looks of it, Booker has scored himself a new girlfriend, a somewhat eccentric lady called Ellie. 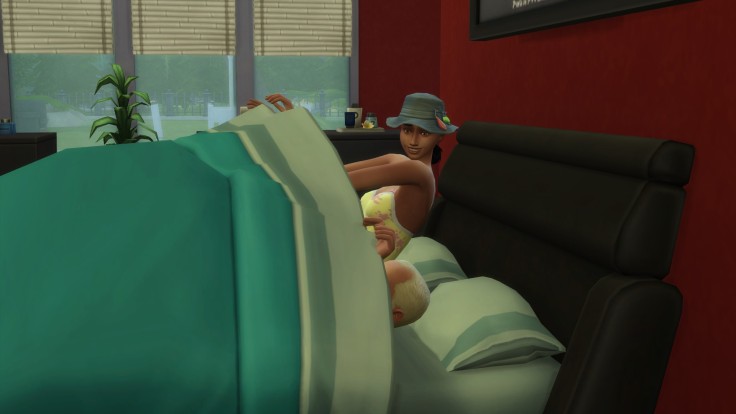 …in fact, maybe they spiced things up.

I figured it would be nice for Booker to treat Ellie to a nice romantic date at the lounge in Oasis Springs.

Well, it would have been romantic, if the first person they bumped into wasn’t Booker’s ex-wife, who was apparently on a night out with the good old insane Amos Agustin. 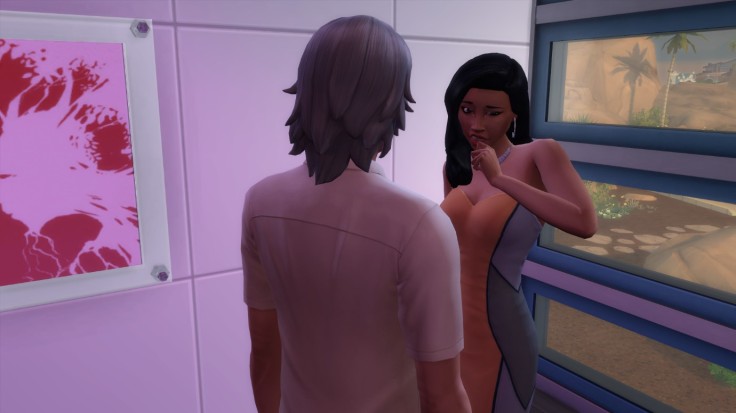 “You need to hide me Amos,” Keiko crouched.

Somewhat distracted, Booker sat down with Ellie, still attempting to have a nice evening.

Keiko appeared to be texting a friend about the whole situation: Ran into ex with his date, help! #awkward

Err, Keiko, you do realise you’re an adult, not a teenager? In fact, you’re getting closer to that elder spin now, and you’re a grandma, you know, a grown up? Nevermind… 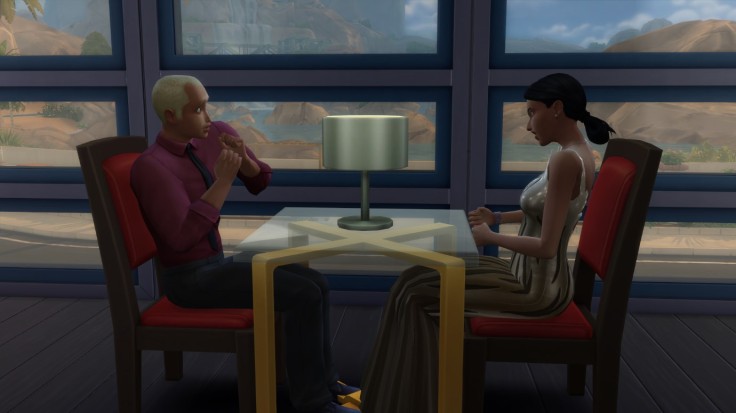 Ellie was losing patience: “Why do you keep staring at you ex-wife?”

“Uh, I’m not, sweetheart, I only have eyes for you, honestly,” Booker said nervously.

Meanwhile, Keiko decided how much she doesn’t care by casually doing sit-ups in the corner… obviously. 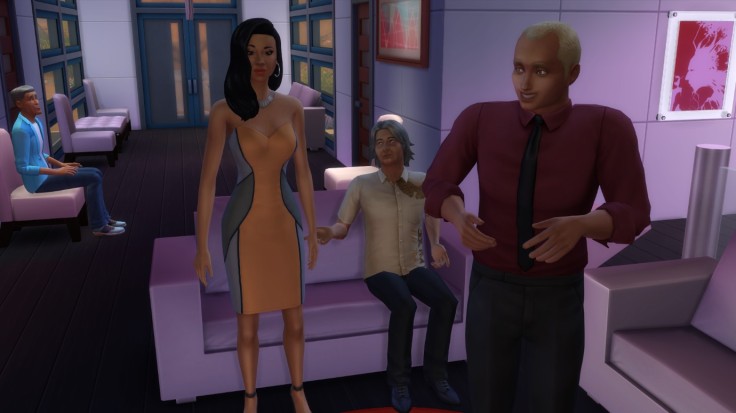 Booker strolled past his ex-wife nonchalantly: “Teehee, did you see how hot my date is, Keiko?”

“Err, I think I’m going to head back home to my wife now,” Amos said to his friend Keiko. “You people are way too insane for me!”

Keiko measured him up and down: “Insane, you say? He’s just trying to make me jealous, that’s all. I bet he doesn’t care about his date one bit!” 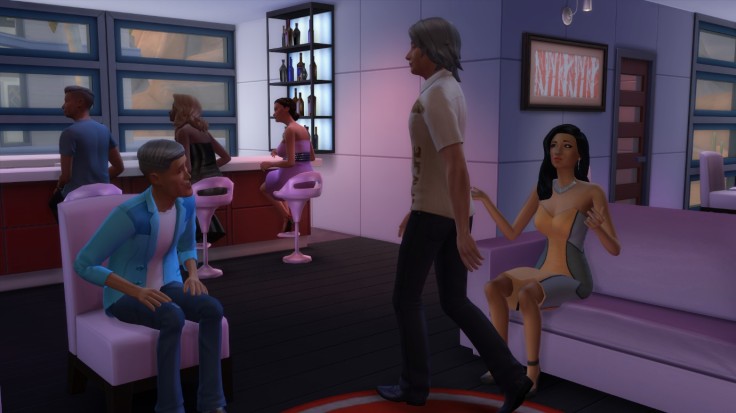 “Whatever, you say, Keiko,” Amos shrugged on his way out, while Kaylan was eavesdropping intently.

“Mark my words, I’m pretty difficult to get over,” Keiko continued desperately.

I don’t know Keiko, Booker seems to be having a pretty good time with his new girlfriend, wishing her good night in a rather lovebird-y fashion…

…what? You mean it all was just for show?

“What can I say, I’m unforgettable, ” Keiko bragged to the bearded man sitting next to her. “The name is Keiko, by the way.”

“I’m sure I’ll remember it,” the man smiled at the beautiful woman on his side. He was rather smitten.

7 thoughts on “The Bloomer Legacy: 5.12 The Grandparents”