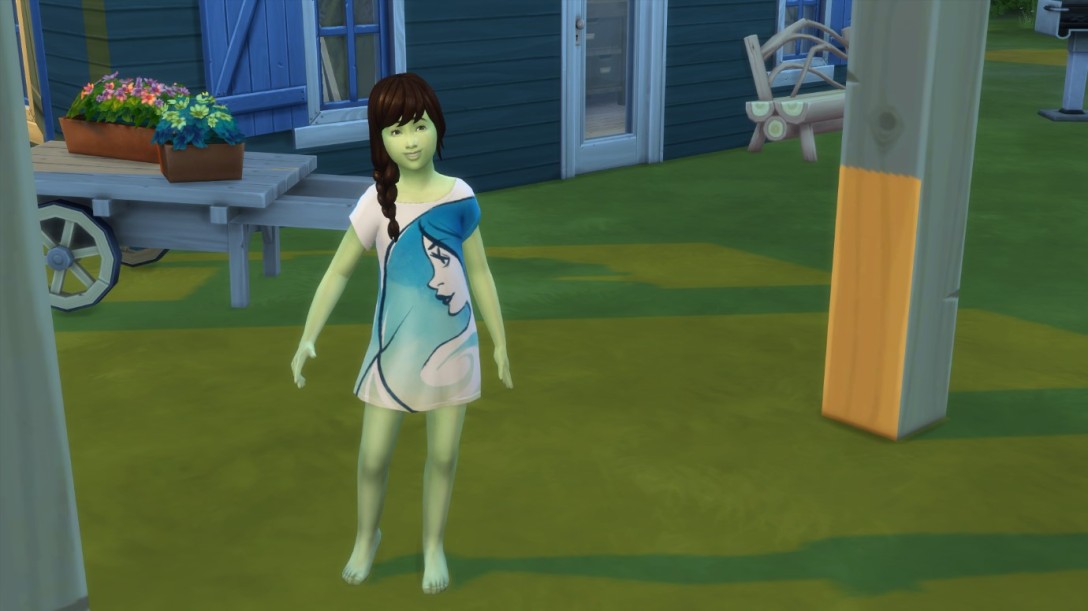 Growing up on an island had its ups and downs. Pauline loved the sea surrounding her, being able to run among the sandy beaches barefoot and the lush nature. Every tree was her treehouse, every rock was her observing platform, every bush was her fort.

And best of all, she got to share the island with her mom. There was nothing her mom couldn’t do, and nothing she wouldn’t be able to teach her.

Her mom was the most amazing person Pauline had ever met.

Of course, she was also the only person Pauline had ever met. 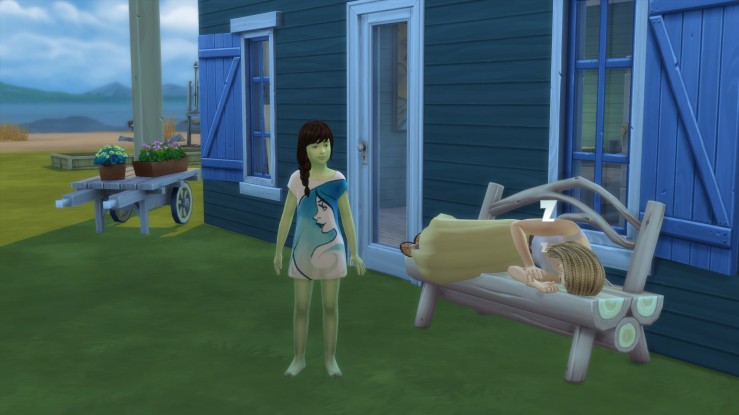 Pauline often wondered what was beyond their little piece of the world. She knew there had to be something, since her mom sometimes left with all of her paintings to go to a place called the mainland. All Pauline knew about it is that it was a dangerous place that her mother was protecting her from, so she would never go there.

But still, living on a single island makes you feel restless.

And so one day, when Astrid fell asleep, Pauline decided to see how far the island would go. As long as she didn’t go past the shores, she should be safe, after all… 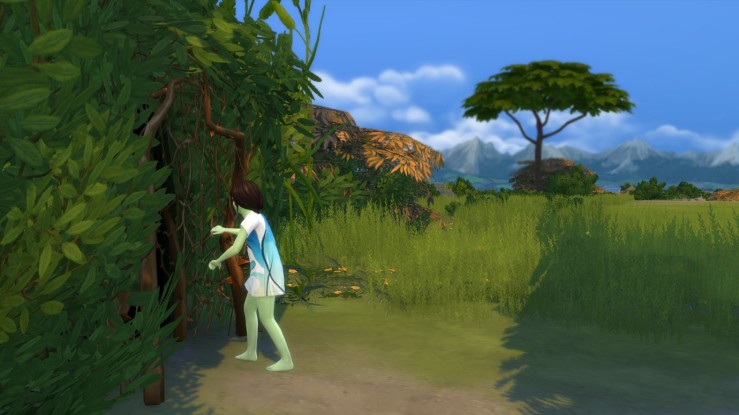 But what would the rule be for a secret passage going into the shrubbery at the far end of the island? Pauline hesitated. She looked back towards the cottage she grew up in, took a deep breath, and walked through the branches.

What she discovered was like nothing she’d ever seen before. There must have been a castle here a long long time ago, but not much has been left. Instead, a gorgeous natural pool lay ahead of her.

Eager she climbed up onto the platform and dove straight in.

It was the most fun she’d ever had. 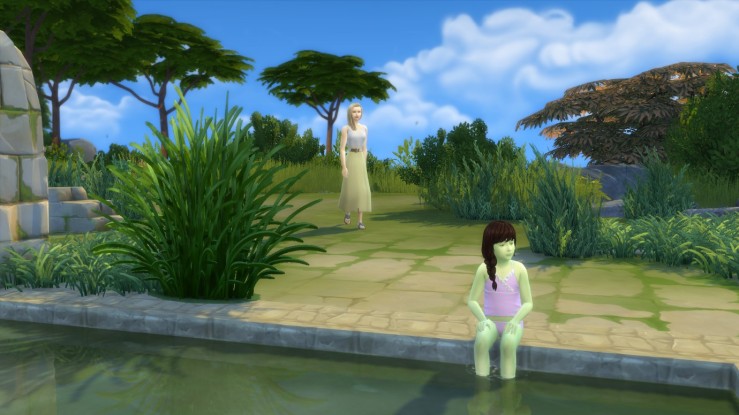 She wasn’t sure how much time she’d spent splashing in the water, but her initial excitement was gradually replaced by inexplicable sadness. How come she hadn’t known about this place, even though it was so close to her home? And what else could be hidden from her right under her nose?

“You gave me such a fright, Pauline,” Astrid exclaimed. “Why would you wonder off on your own like that?” 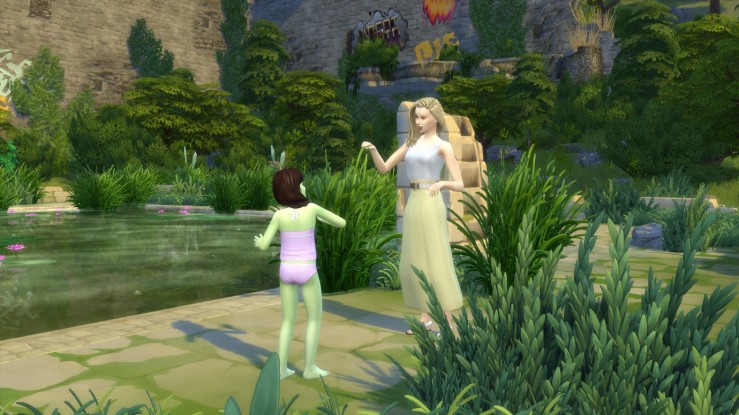 “Now listen to me young lady, you can’t just sneak away like that. The passage to the Bluffs is hidden away for a reason,” Astrid scolded her daughter. “You cannot come here!” 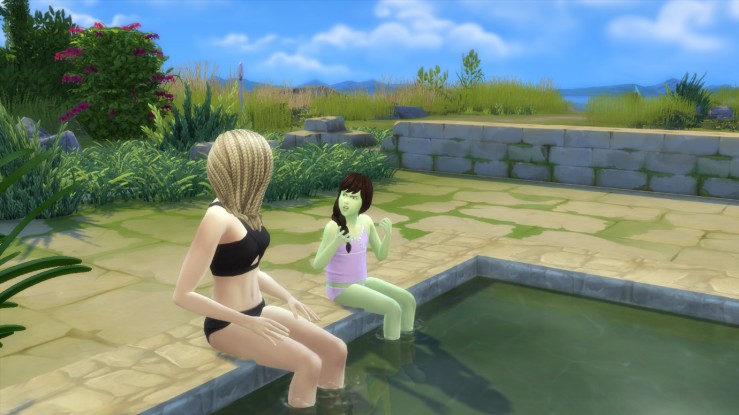 “But why?” Pauline yelled angrily. “This isn’t the mainland! There are no monsters here! I was just bored.”

“No! I don’t want to, I’m not going anywhere,” Pauline shouted.

“This is not a discussion, missy. We are leaving,” Astrid stood up, frowning. “I’ll explain when we get home.” 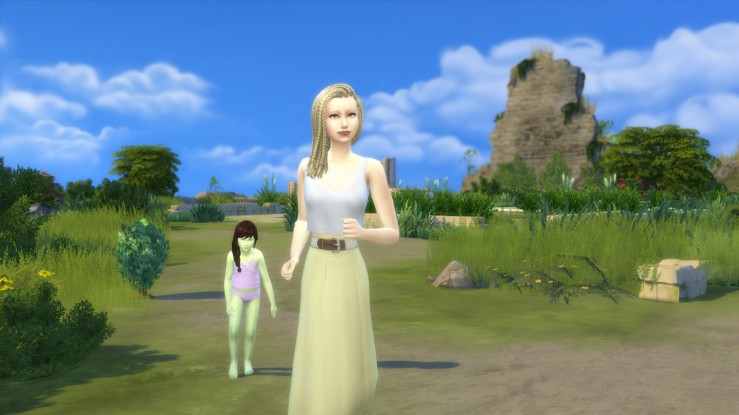 She’d never been this angry at her mother.

There better be a good reason for all this. If not, she would run away from home, she decided. 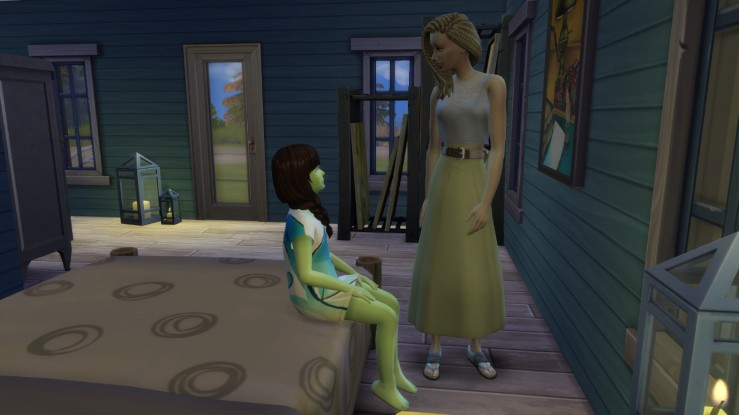 “Sit,” Astrid gestured towards the bed as they entered the cottage. “I suppose you’re now big enough to learn the truth.”

“I told you that we can’t go to the mainland because the place is full of monsters,” she continued. “But the truth is… it’s not them. It’s us. We are the monsters.”

Pauline’s jaw dropped as she watched her mother twirl around and turn into a strange green creature with bug-like eyes.

“This is my true form,” Astrid told her daughter. “You would have been too little to remember seeing me in it. But this is why your skin is green. And so we must hide. We don’t belong on this planet, Pauline. Our ancestors are not like anyone else.”

“But, I don’t understand,” Pauline looked at her, puzzled. “You’ve never looked like this before.”

“I’ve always looked like this,” Astrid shook her head. “I’m a full alien, meaning that I have some… powers. I rarely use any of them, apart from the power of disguising myself. I can make myself look like a regular sim, but the true me is still there, underneath. That’s why I can venture out there, unrecognised.”

“So teach me how to do it,” Pauline exclaimed. “And then I can go with you!”

“I wish I could, sweet girl,” Astrid sighed. “But you’re only half alien. You will never be able to disguise yourself. So you must stay here, where it’s safe. Where no one will hurt you. You understand?”

“Now be good, and play in here,” Astrid handed her daughter a set of crayons. “Why don’t you paint something beautiful?”

Something beautiful. Easier said than done. Pauline stared at the crayons in her ugly green hand. She’d never thought about it before, the way she looked.

How could she not have seen it before? She was hideous. And because of that, she would never be able to be seen by anyone.

In the years to come, Pauline would never forget this day.