Vito dragged himself through the back garden. Seeing how animated the girls were that afternoon, he almost regretted not taking the front door to his house.

“So hopefully the cute guy will come to the bar again tonight,” Sera whispered to Hallie conspicuously.

“You should see how ripped he was…” Sera continued. 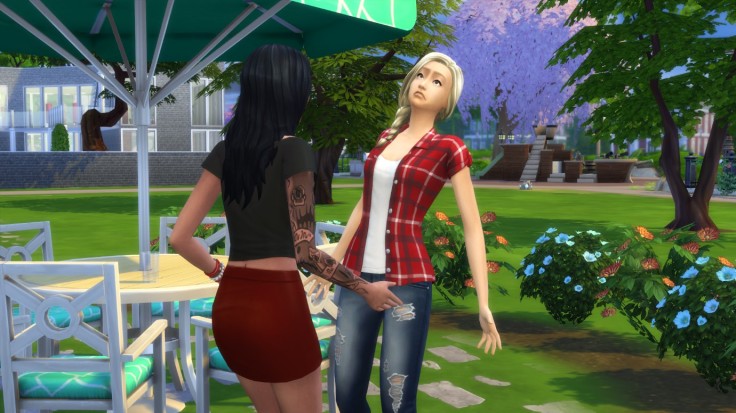 “And you’re telling this to me why exactly?” Hallie stopped humouring her altogether.

“Well I have to tell someone, don’t I,” Seraphina giggled. “Don’t worry, you’ll find someone…”

Hallie rolled her eyes. That sentence was her pet peeve, which Sera knew all too well. It was a bit of a running joke between them, though not necessarily one Hallie appreciated all that much.

“Why don’t we focus on finding you someone, k?” Hallie brought the focus back to Sera. “Like said hunky ripped bar dude.”

Hallie noticed Vito sulking around. “Hey, what’s up with you?” She turned her attention to him.

“Uh, nothing,” he said shiftily, glancing at Sera.

“Anyway, I’m off to work,” Sera sighed. Her and Vito managed to be somewhat civil to each other these days. For the most part, they just stayed out of each other’s way. He certainly wasn’t going to pour his heart out in front of her, whatever first world problem he was experiencing now. 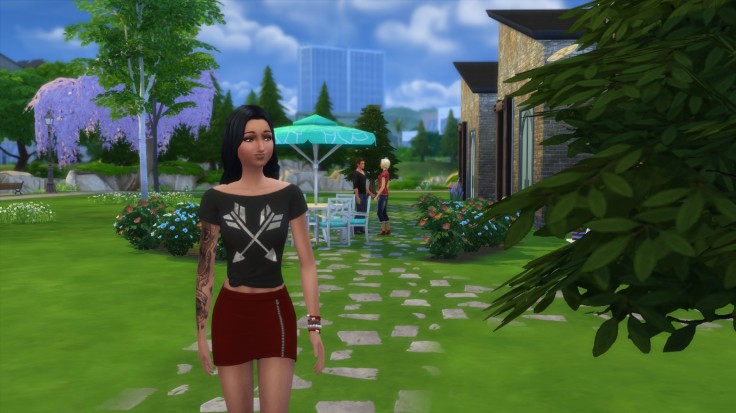 Maybe he was shot down by one of the models for a change, Sera smirked as she walked away. That would be a first. Everyone ate out of the palm off Vito’s hand, didn’t they?

Whatever. Hallie would be the “lucky” one to hear all about it. It was none of Sera’s concern.

She’d much rather think about the hunky dude. Though with her luck, he was probably from out of town.

Anywho… too many distractions. Time to mix some drinks!

After all, her dad used to work here when he was young – wasn’t that how he met her mom? So maybe there was hope for her yet…

But even if being a mixologist didn’t lead Seraphina to meeting the love of her life, it was a fun enough job. 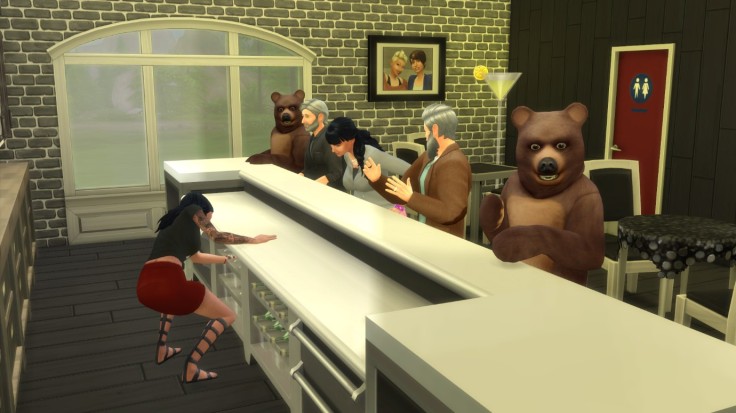 She never knew what the next night would have in store. In particular when the bar manager, Seraphina’s distant relative (uncle twice removed, was it?) insisted on throwing bizarre theme nights like tonight.

Bear night… what a stupid idea. On the off chance the hunky guy did show up, she wouldn’t even recognise him.

Then again, people dressed up as bears were not going to be the most surprising encounter of the evening.

His hair was long now, but his face hasn’t changed at all.

What was he doing in Newcrest? Surely he’d hate this city and all the memories he had of it, Sera thought.

Louis looked her up and down before sitting down at the bar.

“You seem pleased to see me,” she said sarcastically.

“Always a pleasure,” he sneered at her. “You’re a bartender? Huh.”

Seraphina decided to be as friendly as possible, ignoring his tone:

“What, don’t you have confidence in my mixology skills?”

Louis laughed. “I have no confidence in your social skills.”

“Says the guy who comes into my family’s bar and insults me,” Seraphina replied calmly. “People change, you know?”

Louis patience seemed to have run out that very minute.

“What do you expect Sera, that I’ll jump up and down rejoicing at our reunion?” He scoffed. “What is it with you Bloomers? You think you can walk all over people and they just laugh it off the next day?”

So that was what Vito was all weird about, Sera realised.

And then it dawned on her that it wasn’t really her Louis was yelling at. After all, she’d been there. 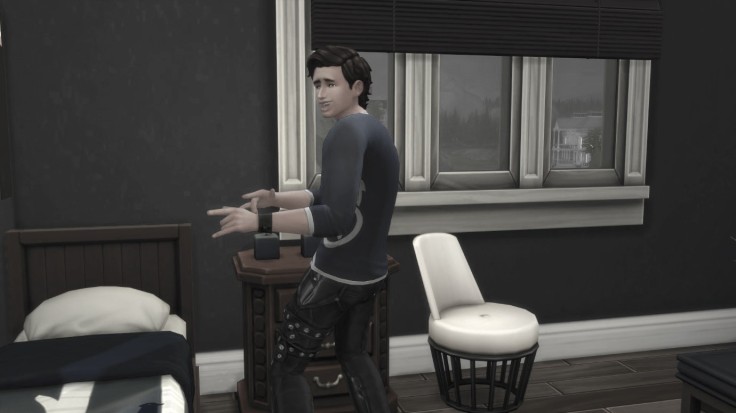 She remembered when her brother turned into Antoine right in front of her. So of course, Louis would become her.

How was it possible, though? She could reason with why Antoine had dropped her like a hot potato right after their holiday, they barely knew each other. But Louis and Vito, they had a real relationship. And, as nauseatingly annoying they may have been, they seemed perfect together. Why would Vito throw it all away?

Seraphina felt terrified by the prospect of reliving last summer, even as an outsider. She had to do something.

And so she went to the person she had the best relationship with out of her peers, Hallie.

Hallie seemed apathetic. “Why do you care? You almost broke them up last year, remember?”

Of course she remembered. Now that Vito was ruining their relationship all on his own, the thing she’d done to Louis last autumn was haunting her. It wasn’t exactly something she needed to be reminded of.

“But they love each other,” she said desperately.

“Pfft, love,” Hallie looked like she was going to be physically sick. “There’s no such thing as love! Everybody has a definition of love in their head, but everybody’s is different. They all have one thing in common though, it always comes at a cost. Your love is only true if you do x, y and z… otherwise, it doesn’t count. Love is a conditional offer. They’re better off without it, both of them!”

Sera stared at her. Where did all this come from?

“But Hallie, you’ve never even been in a relationship,” she pointed out. “You wouldn’t really know that much about love…”

Sera wasn’t all that sure what Hallie was talking about, but one thing was clear to her; she needed another ally in this battle. One that actually believed in love.

Sera hated the thought of approaching Carly about it. But if her sweet-dispositioned sister wasn’t going to help, then no one would.

“Hey.” She entered the room nervously. Her sister looked up at her in surprise. Ralph quickly used the moment to swap out two of their chess pieces.

“Hi Sera,” Carly looked at her quizzically. “Sure.”

“You’re cheating anyway,” Carly stood up with a laugh. Ralph begrudgingly left them on their own. The two sisters sat down on Carly’s bed.

“It’s Vito,” Sera got straight to the point. “I can’t stand what he’s doing to Louis. Forgetting about calls. Ignoring messages. It’s not right.”

“I’ve thought about it,” Carly told her. “But… what can I say? You can’t force somebody to love someone…”

“But he does love Louis… doesn’t he?” Seraphina’s voice was shaking. “He cared for him! We all saw it. You couldn’t plumming unsee it, they were everywhere! His feelings can’t just have disappeared into thin air? It couldn’t have all meant nothing!”

Carly gave her a funny look. “I didn’t know Louis and Vito’s relationship meant that much to you.”

“It doesn’t,” Sera said quickly. “It’s a matter of principle!”

“You think Vito will listen to me?” Carly asked. “You know he usually thinks his way is the right way…”

“You mean he’s an arrogant plum!”

Carly looked at her sister disapprovingly.

Carly examined Sera’s face for a long while. It wasn’t just Vito’s relationship she seemed worried about now. 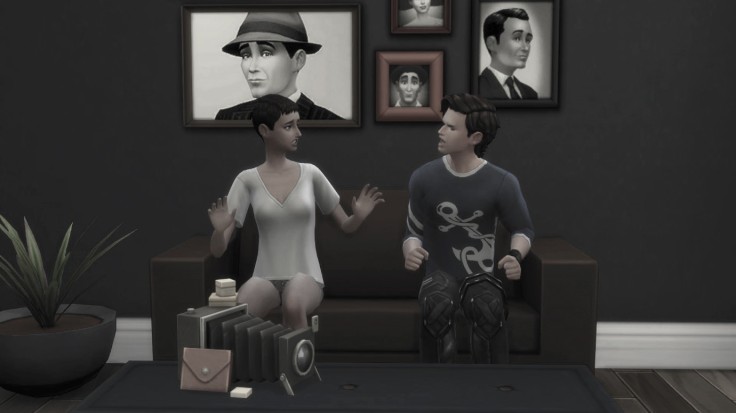 …but apparently it didn’t go too well.

In fact, it didn’t go to Sera’s liking at all. Vito ended up breaking things off with Louis altogether. And worse, jumping into seeing other people the very next day.

Sera resulted to desperate measures and even attempted to talk to Vito herself. But he completely dismissed her. Not that she’d expected a different result. But she had to try.

All in vain though. The nauseatingly annoying couple was no more…

Sera distractedly shook the cocktail in the shaker. It’s been years. But it still felt fresh in her head. How did it have to feel to Louis?

Spotting Louis at one of the tables, she reluctantly walked over to him.

“What now?” He glared at her. “Haven’t we done enough small talk?”

“I didn’t come to make small talk. I came to apologise.” 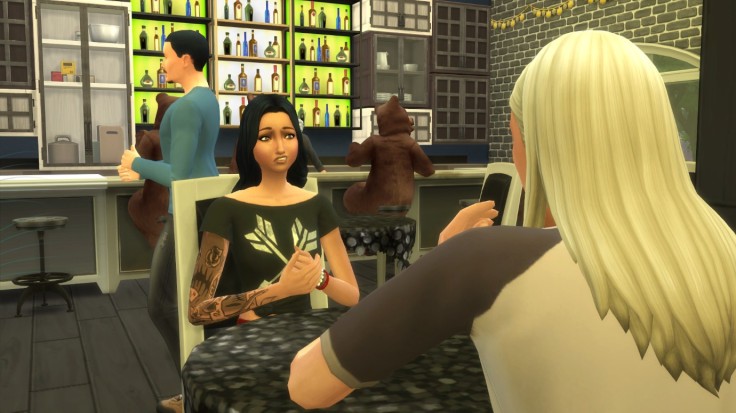 “I’m really sorry about what I did to you,” she said. “When you first came to Newcrest. The things I said to you. I was so upset, and I wanted to hurt Vito. I didn’t stop to think about you at all. I just wanted to take the things Vito said to me and throw them back at him.”

Louis tilted his head. “What did he say to you?”

“It doesn’t matter,” she shook her head. “It wasn’t about you. It was about me and… Antoine. But you probably don’t remember him.” She let out an awkward fake laugh.

“Anyway. I just wanted to say I’m sorry. And that I understand why you’ve reacted to seeing me the way you have. You have every right to hate me.” She concluded.

“Well, in the grand scheme of things, worse things have happened to me,” Louis smirked.

He was about to head for the door, but he seemed to change his mind, turning around abruptly.

“Actually, I wanted to tell you something too,” he returned to Seraphina. “Since you brought up Antoine.”

“I do remember Antoine,” he said. “I actually ran into him when I returned to Windenburg from here, you know. Not too long after Vito and I broke up.”

“Oh.” That was about all Seraphina could manage. She didn’t want to hear anything about him. But apparently Louis was adamant to share. 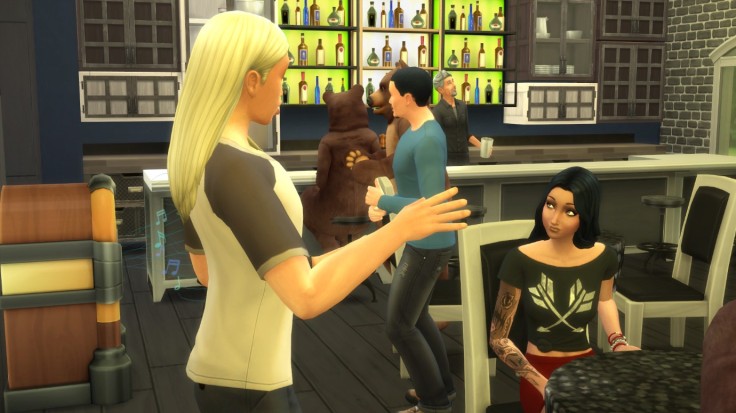 “I punched him.” Louis said matter-of-factly.

“What?” Seraphina was gobsmacked. She couldn’t imagine Louis throwing a punch at anyone, let alone someone he barely knew.

“I randomly ran into him in the street, and I recognised him, so I punched him.” Louis elaborated.

“Because your brother should have.” He said simply.

Seraphina continued to stare at him. “You did that… for me?”

“I was wrapped in my little bubble the summer before. I barely thought about what happened to you. But after… things happened… it hit me. Your brother should have looked out for you. That’s what brothers are for. But he didn’t. So I thought someone should.”

“I can’t believe… You… I don’t know what to say,” Seraphina struggled for words. “Thank you.” She said finally.

“This changes nothing.” Louis told her. “I still hate you.”

When Seraphina left the bar after her shift ended that night, she couldn’t help but smile to herself, thinking of the last thing Louis said to her before finally leaving the bar:

“It was a matter of principle.”

16 thoughts on “The Bloomer Legacy: 9.31 Matter of Principle”