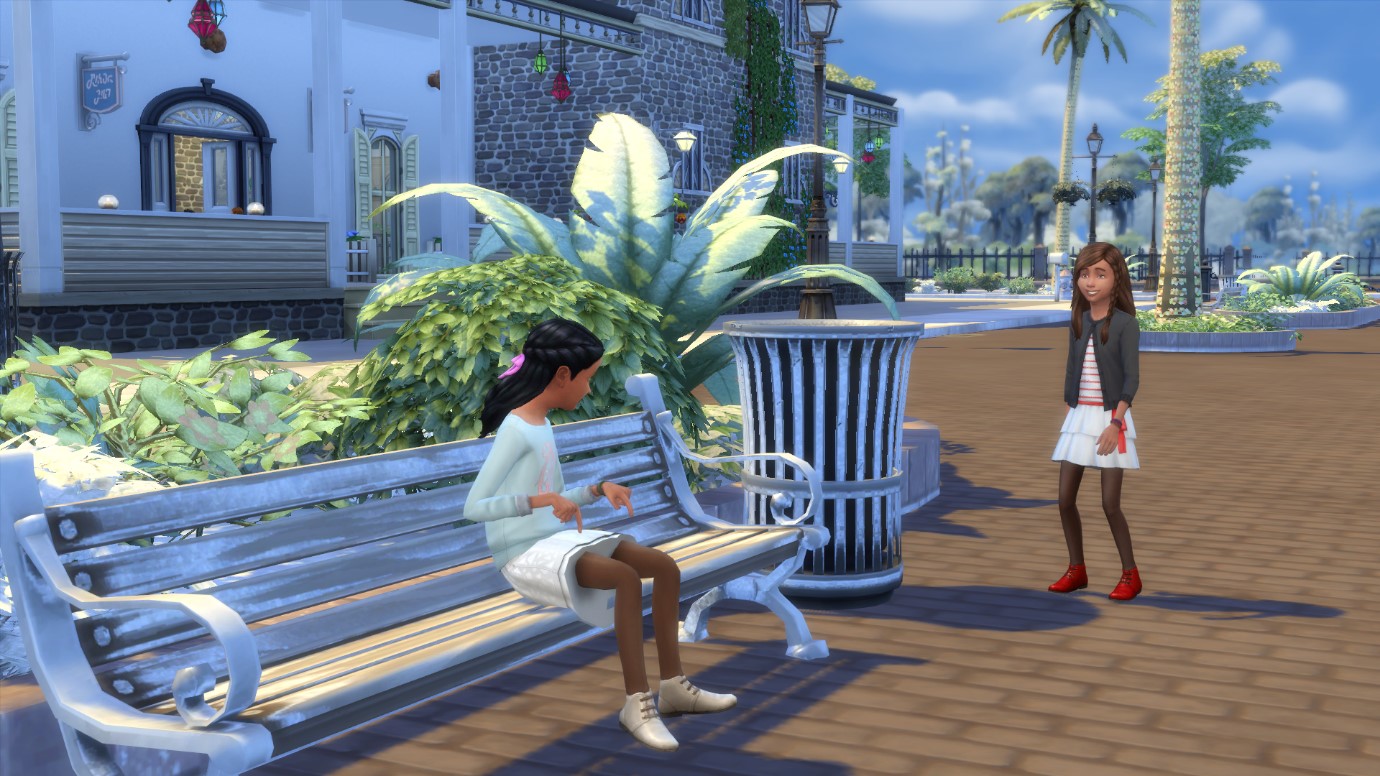 Alexus was drumming with her fingers distractedly when Hope found her in front of the restaurant.

“There you are!” She smiled broadly. “We were worried about you.” 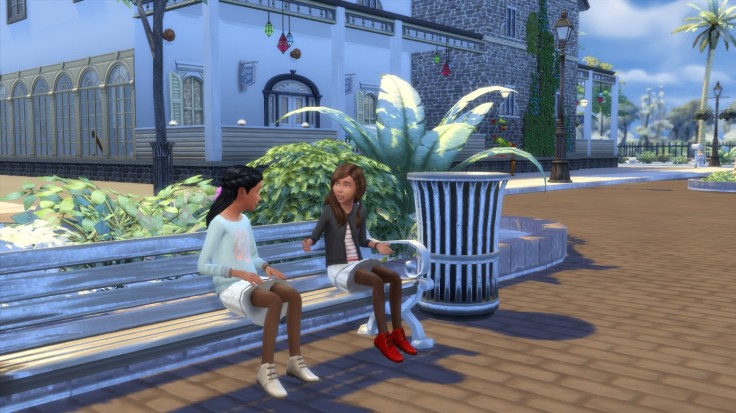 “I can’t do that!” Hope objected. “It’s cold out here. And it’s Snowflake Day! Nobody should be alone!”

“I don’t mind, really.” Alexus was a little taken aback. “I wanted to be alone, remember?”

“Yeah, because you go scared.”

“How… how did you know?” Alexus looked alarmed.

“Well, you got all worried when Donnie started talking about aliens… But don’t worry, aliens won’t hurt you. They’re nice…” 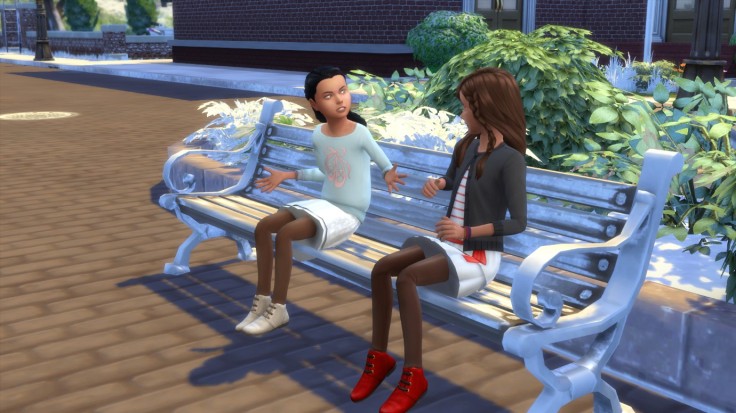 “What do YOU know about aliens!?” Alexus lashed out. “You’ve got an alien and a half in your family and suddenly you think you know all about them? Well guess what, they’re not all the same!”

She jumped up, trying to walk away from Hope. 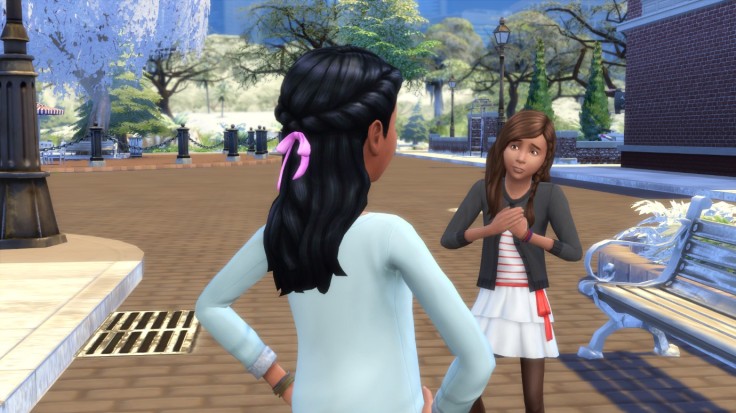 Hope ran after her. “Sorry! You’re right. I don’t know everything about aliens. But those I do know are kind. So I just wanted you to know that you didn’t need to worry.”

Alexus seemed to be struggling with her emotions ok.

“I’m not mad at you, Hope. And I’m sorry too. I just… need to be alone for a while, ok?” Alexus said as calmly as she could manage. 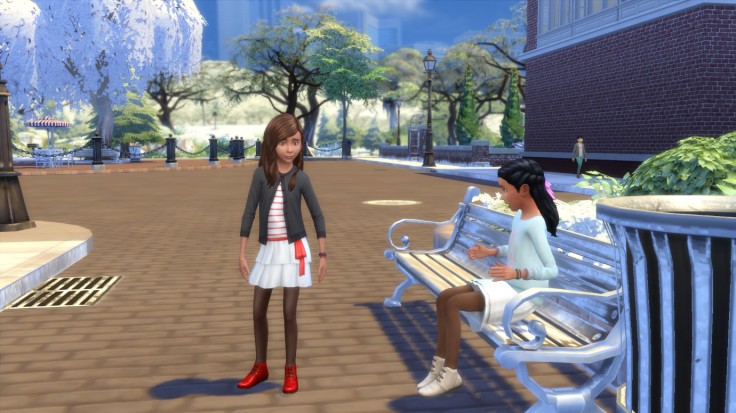 Hope mopily made her way back to the restaurant. She failed. Alexus was still sad, and she couldn’t figure out why, or how to make her feel better. 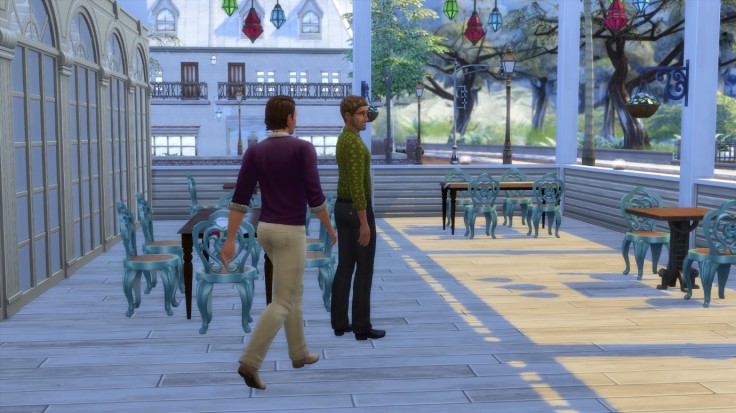 Alexus wasn’t the only one seeking solitude outside. Away from the party, Leo stood on the back patio, looking into the horizon.

“Dad?” Vito opened the door, peeking outside. “What are you doing? It’s freezing out here!”

“Frankly, I just got a little emotional.” Leo gave him a small smile. “Seeing everyone in my restaurant, together… it made me feel like I have a legacy too, you see.”

“What?” Vito laughed. “Of course you have a legacy, dad! The legacy? It’s kind of a big deal, remember?”

“No, that’s your mother’s legacy,” Leo corrected him. “It’s a huge deal, and I’ve done my best to support her with it over the years. But this restaurant… it’s all mine. Something I can leave behind. Something that maybe would have made my family proud.” 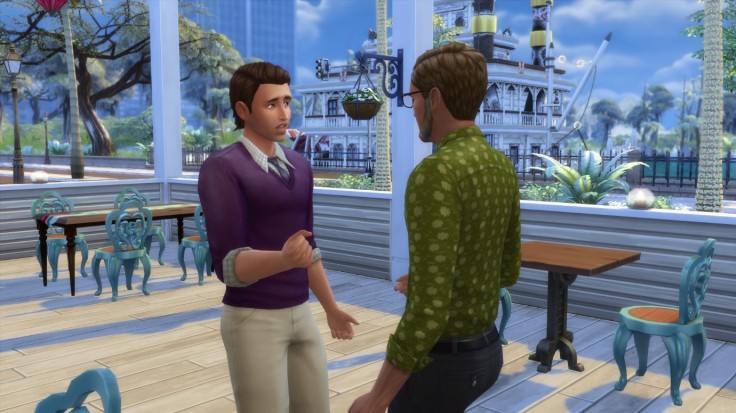 Vito studied the wrinkled face of the man in front of him. All his life, he’d known his parents to be inseparable. Vito rarely thought of one of them independently of the other. They were the loving couple that raised him and his sisters, that wanted the best for them, and the best for Newcrest.

“Dad… how did you feel about none of us carrying on your last name?” He asked carefully.

Leo gave him a funny look.

“Honestly? When you were born, I didn’t make much of it at the time.” Leo contemplated. “Your mother was the heiress to the Newcrest legacy. It seemed obvious that you’d have her last name. The Bloomers build Newcrest, everyone knows that. How could you, the future heirs, be called anything else?”

“Do you have any regrets?”

“I wouldn’t call it regrets. But… a small part of me selfishly wishes the Sorrano name lived on, yes.”

His father looked so old and fragile in front of him. Vito spontaneously hugged the man. 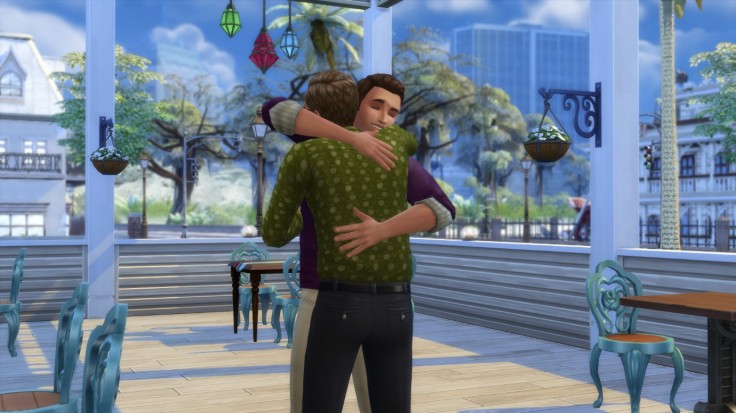 Leo smiled at his son, misty-eyed.

The two men didn’t want to prolong the emotional moment, so they headed back inside.

Leo’s chest was filled with pride. Vito was right. He was the living proof that he’d left a legacy behind. Leo had raised a good bunch of kids. The restaurant, that was just a cherry on top.

While his father seemed to have a weigh of his shoulders, Vito was mulling their conversation over. Certainly gave him a lot to think about…

When they walked in, Leo spotted Aslan kicking into the bar, pouting. 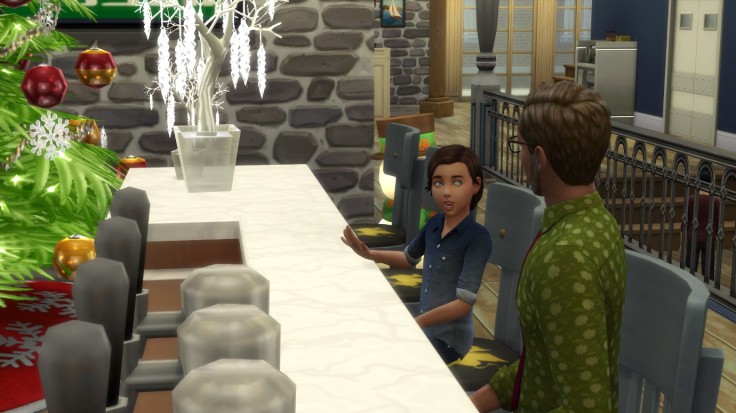 “Sorry grandpa.” The boy looked guilty. “I didn’t mean to break your furniture.”

Leo watched him, not saying anything.

“I didn’t mean to break anything… But I break everything. Why do I always do that?” The boy asked.

“I think you’re not talking about the counter anymore, are you?” Leo smiled.

“No… I think Hope hates me now. Because I was mean to Donnie. But I didn’t mean to. I just… I was just being honest? Is being honest wrong?”

“That seems like quite a pickle,” Leo acknowledged. “There’s nothing wrong with being honest. But there’s being honest, and being hurtful. They’re two different things, you see.”

“So you think I was wrong.”

This was way more than Le had bargained for.

“I think I don’t know enough about it. You should talk to your dad.” He said brightly. “He has a good head on his shoulders. And he was once like you. He’ll know what’s right.”

Leo’s wife was talking to a whole other set of kids in the meantime.

“So, you’re a half-alien, right?” Donnie was checking if he understood it all correctly.

“Yes, that’s right. My mother was an alien, and my father was human.”

“So, wait, was your alien mom the same alien that was Peyton’s?” Donnie asked.

“I bet!” Donnie nodded enthusiastically. “Do you think there’s more aliens here, on our planet?”

“Quite likely,” Pauline said. “I doubt Peyton and I are the only ones…”

“Exactly! I found an alien grave at the cemetery, actually! So that was a third, right?”

Hope observed her grandmother. “You look sad, grandma! Did you know the alien who died?”

Pauline sighed. Seemed there was no avoiding it. “She was my mother.” 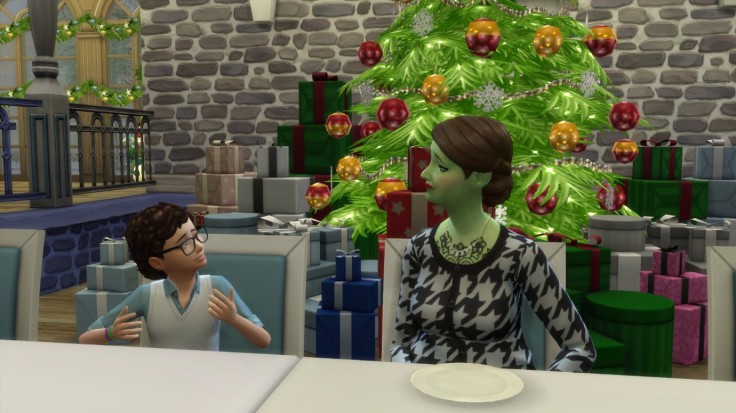 Pauline was lost for words for a moment. Not that this was particularly news, she’d known all the children were orphans, of course. But that didn’t make it any easier.

“I’m sorry too, Donnie.” She simply said in the end.

“It’s ok. I didn’t really know her. I was too little when she died. Did you know yours?”

“Yes.” She wrecked her mind for something positive to say about Astrid. “She was a painter. A very good one.”

“Oh really? I love to paint!” Donnie lit up. “I didn’t know aliens like painting too!” 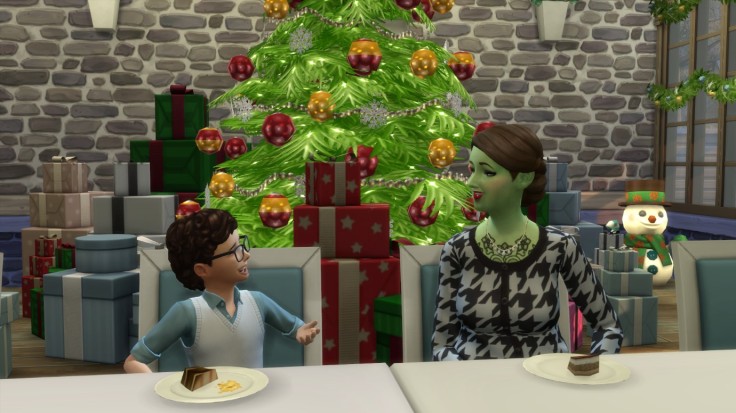 Pauline smiled. “Aliens aren’t all that different from you, Donnie. They have their likes and dislikes, their fantasies, their fears… and feelings. They can love, just like anyone else, too.”

They can also hate, she thought. But this was not the day for getting into that.

“Makes sense,” Donnie nodded. “But then, if aliens are like us, why would they even need disguises?”

“No, but you can, right?” The boy turned to Pauline. 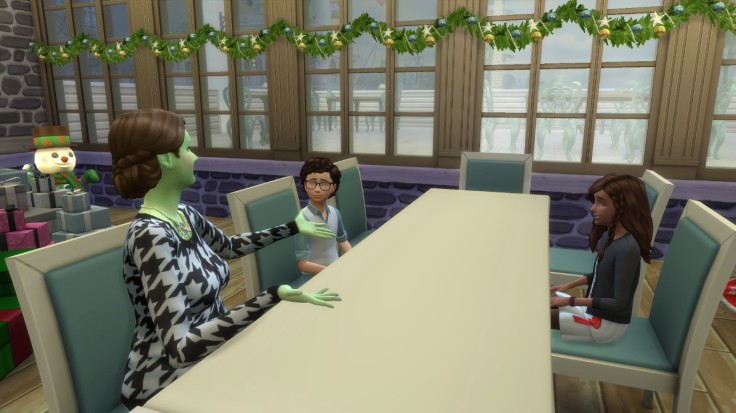 “I can’t since I’m only a half-alien,” Pauline explained. “And Peyton can, but she doesn’t, since she doesn’t feel like she was anything to hide, as she should. No need to try to be something you’re not.”

“What about your mom?” Donnie could help his curiosity.

“She did wear a disguise, yes.” Pauline admitted. “Plenty of them, actually.”

“Why was she hiding?” Hope asked.

“I think she was scared. Scared of the world, scared of herself…”

“So, did she look just like a human in her disguise? How would you even be able to tell if someone’s an alien then?” Donnie pondered.

“Most of the time, you can’t.” Pauline answered. “But nobody can pretend to be something they’re not forever. So sometimes, even aliens give their disguises away, when they get very emotional.” 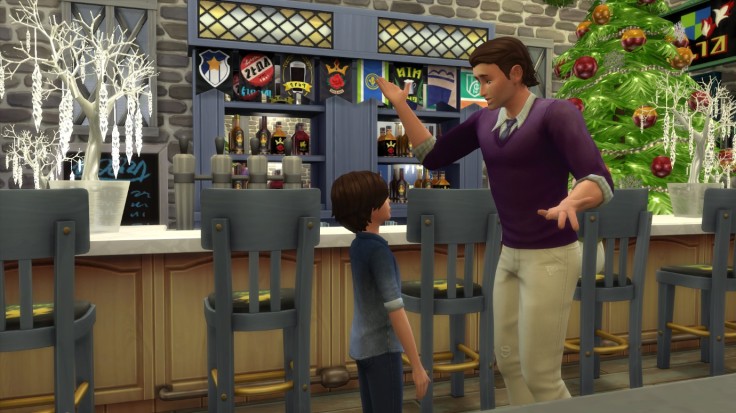 “There you are! It’s not like you to hide away from the spotlight.” Vito noticed.

“Well… I didn’t want to make even more of a mess.” Aslan sighed.

“I called Donnell a weirdo. By accident!” he added quickly. Vito tried to keep a straight face on. “And now everyone thinks I’m evil. Even Hope.”

“I’m sure nobody thinks you’re evil.” Vito reassured him. “Everybody does things they regret sometimes. But if you show everyone that you feel bad about it, and that you’ve learned your lesson, they might just forgive you.”

“Do they always forgive you?” Aslan asked.

Vito looked at the precious face. “Well… it depends on what you’ve done.” He started slowly. “But I think you’ll be ok. If you’re genuinely sorry, they’ll forgive you. Just… don’t wait too long. Never wait too long with apologies, ok?”

“You’re ok too.” Vito grinned. “More than ok. Now, what did we say about waiting? Why don’t you go find Hope and Donnell?” 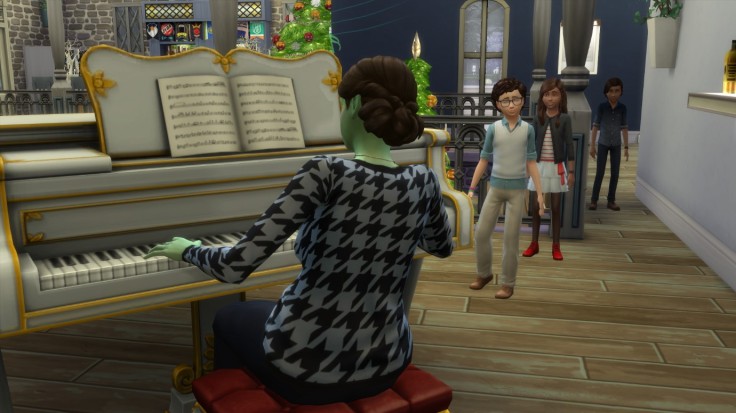 They weren’t too hard to find, both Donnell and Hope were listening to Pauline’s concerto.

Aslan watched them from the distance for a while.

You can do this, he told himself. Remember what dad said. He took a deep breath.

“What is it Aslan?” Hope said defensively. “Did you come to make fun of us again? Haven’t you had enough? It’s Snowflake Day!”

“Really?” Aslan asked, scared to believe that things got fixed so easily.

“Yeah. Just be nice, from now on.” Hope said simply.

“Actually, on the whole, today has been pretty amazing.” Donnie continued. “I’ve made friends! And found out so much about aliens, and how to find them!”

“Well duh, you find them in this room,” Aslan started to say. “Sorry. Again.” 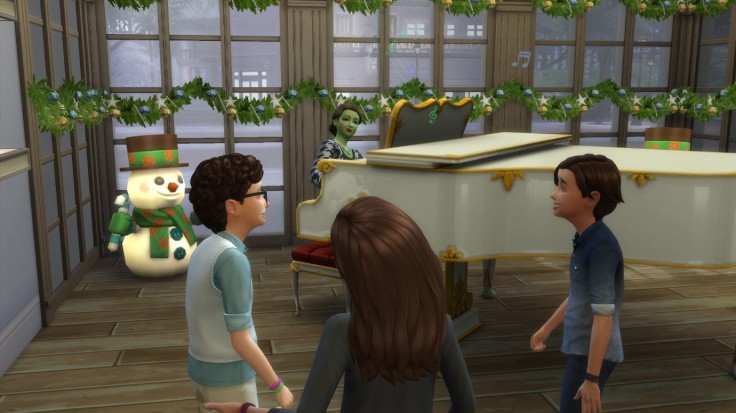 “Donnie meant how you can find aliens that you don’t know are aliens!” Hope explained, the excitement apparent in her voice. “Grandma told us how to recognise that someone’s an alien wearing a disguise.”

“Oh really?” Aslan was actually a little curious now. “How?” 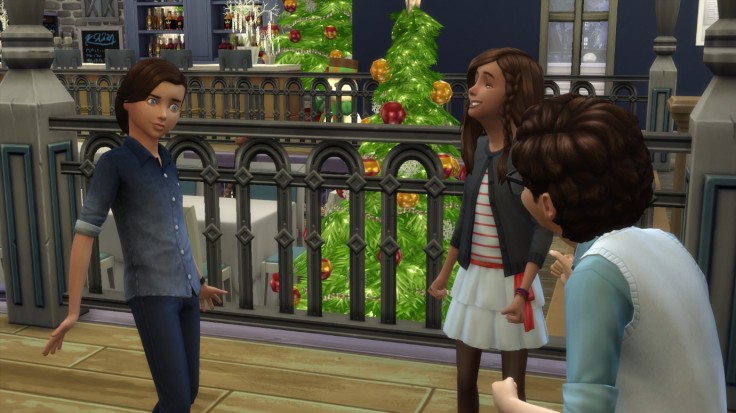 “They glow!” She and Donnie finished in unison.

Aslan opened his mouth in disbelief. “They what? Are you sure about that?” 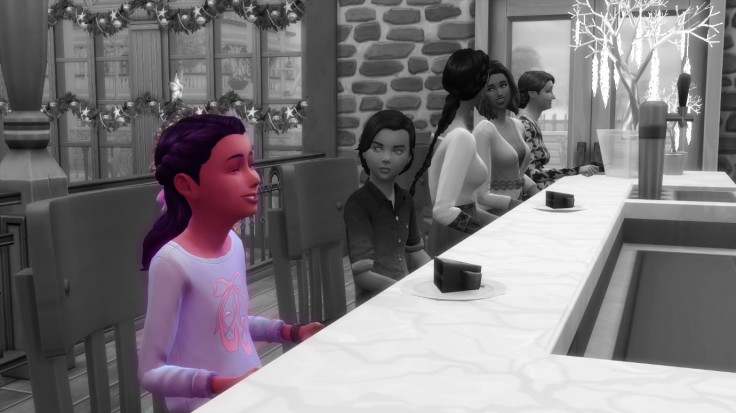 Turned out he might know the most about aliens in disguise out of the three of them.