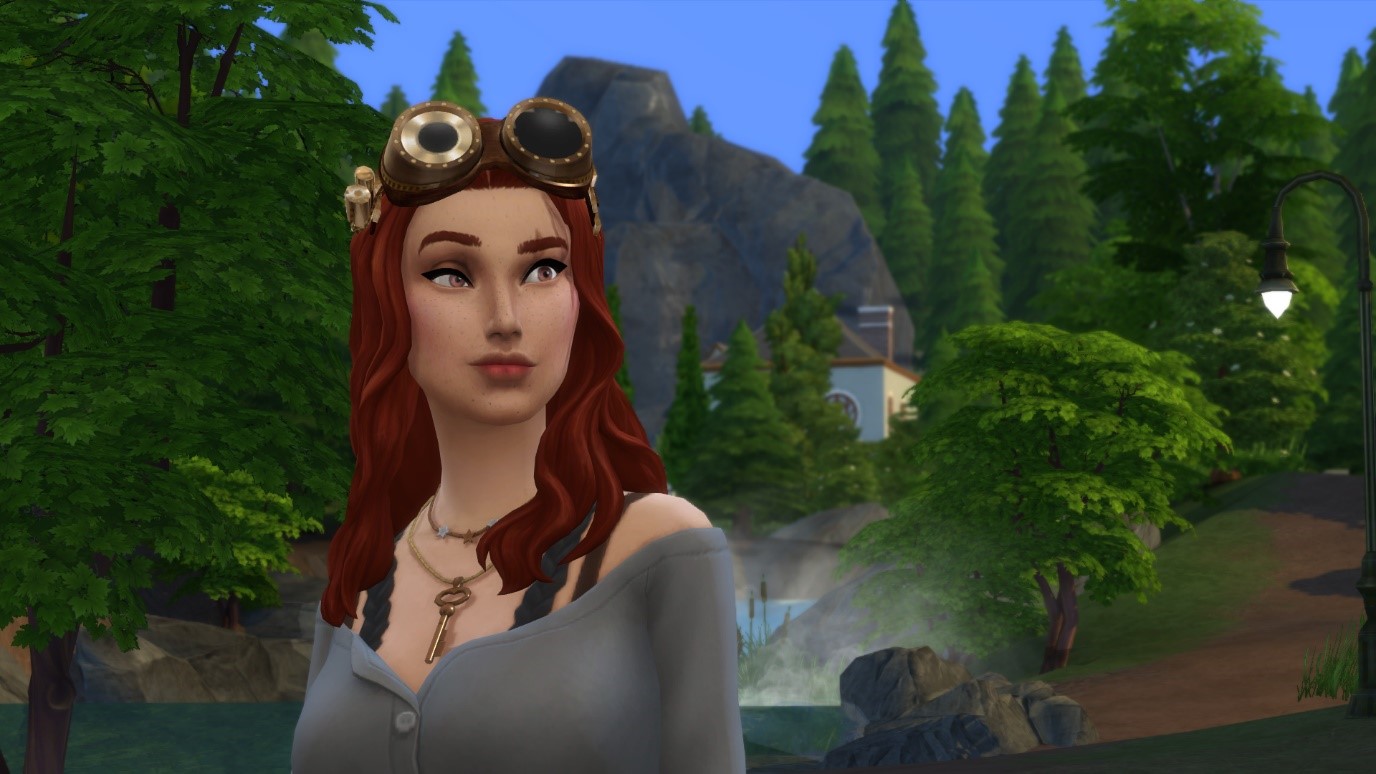 As far as being secluded goes, this place sure does the job, Cordelia thought. She’d been on the road for days. And there was something peaceful about these woods.

She’d passed a house, but avoided going anywhere near it. She was here to hide away, not to seek people out.

The sprites did not seem to catch up with her quite yet. She didn’t dare think this meant she was finally free of them. It was tempting to think that perhaps they would not venture beyond Gibbs Hill where she spent her whole life up till now. But that just seemed too easy. She may as well have run away as a teenager. She sure wanted to.

After her mother’s passing, various people in the village felt sorry for the little girl, plenty of them willing to take her in. But it was the same old story every time. The sprites always showed up to pester her, demanding entertainment, demanding she act a certain way… Whatever family she was staying with at the time would be understanding at first, conscious of the girl’s traumatic loss, but eventually, they tired of Cordelia “acting out.” And so she’d be passed on to the next family, and the next.

By the age of eighteen, Cordelia felt like she’d stayed with every household in Gibbs Hill. And none of them wanted her. At best, they were wary of her, but some took it further, calling her names. Some even claimed she was a witch. When she was younger, she tried to explain it was the sprites that made her do the things she did, that she couldn’t think straight with them being around, but since they were invisible to everyone but her, it just made things worse. No one believed her. So she left Gibbs Hill behind. There was nothing left for her there anymore.

She forced her mind to focus on the present. There were no sprites here. She was fine, at least for now.

She spotted a mailbox, right in the middle of the woods. What the heck? The last house she’d passed was miles back. She looked around, but didn’t see any other dwellings. The only things that stood out was the mailbox itself, and a large tree beside it.

Cordelia was hesitant when she first approached it. There were mushrooms growing at its roots, which made her apprehensive, reminding her of that cursed clearing. But somehow, this tree did not seem menacing.

The branches were intertwined with each other, growing tall and wide. The tree must have been ancient. She was drawn to it. Before realising it, the palm of her hand landed on the bark. She patted the tree gently. Ridiculous, as if it could feel her touch.

She realised the tree was hollow. Curious, she poked her head inside. A surprisingly long passage laid out in front of her. She furrowed her brows.

“Well, if the goal is to be as hidden as possible..” she muttered to herself before delving inside.

The first thing she noticed when she emerged on the other side was the pink light. She found herself in a meadow, but nothing like the one where she first encountered the sprites during her mother’s secret ritual. This place was serene. She could hear birds chirping, and the sound of a waterfall in the distance.

And nestled in the middle of the meadow was a cute crooked house.

Her first though was that the place was abandoned, but she quickly dismissed the thought. Who in their right mind would leave a house in a place like this? No, somebody lived here. Probably the owner of the very mailbox she saw back in the woods.

Curiosity overtook her, an she made her way closer to the house. She completely abandoned her resolve to not interact with the local residents. The house just made her too darn curious. She needed to know who lived here.

She heard someone speak on the other side of the house. And then she spotted him.

A lanky looking man, well, more of a boy, engrossed in his painting. On second thought, Cordelia wasn’t sure he was human at all. His hair was snow white, and his ears pointy. Was it a good idea to approach him? He hardly looked menacing.

“Just a few finishing touches,” he mumbled to himself. “Peeerfect. There. Hah!”

She cleared her throat, “Um, hello?” She spoke up, her voice uncertain. What should she say. It dawned on her that she was technically trespassing on his property. “Sorry to disturb you. I… got a little lost, I guess.”

She was taken aback for a moment. His eyes were bright lilac. She’d only seen one other person with eyes that colour in her whole life. Her mother.

“Good timing on your part,” he broke of the silence. “I’m just finishing up my latest masterpiece. What do you think?”

“Um…” she turned to the canvas.

Cordelia’s eyes traced the stick figure with wild hair and a goofy grin. It reminded her of her drawings as a kid, back in the good old days, when she enjoyed that sort of thing.

“It’s… something.” She managed.

“It’s a self-portrait.” He clarified, looking proud of himself.

“Yes, um… what is this place?” She changed the subject. “Do you live here?”

“We’re in Sylvan Glade. And yep, I do live here. Don’t really get many visitors though. Probably because any human who enters here will succumb to teeerrrrible fate.” He twisted his face in a grimace. Cordelia noticed how sharp his teeth were. Definitely not a human.

“Wait, what do you mean?” She asked, anxious. She took involuntarily took a step back.

“Sylvan Glade welcomes folk of my kind, the fae, pixies and the like. I’m an elf, for instance. But as for the likes of you, human…” He paused for dramatic effect. “Let’s just say any human who enters these parts gets permanently cursed by the power of the Glade.” He finished his eerie warning. Cordelia couldn’t believe it. In her attempt to escape one curse, she stepped straight into another.

She planted her face in the palms of her hands, closing her eyes. “No no no no, this can’t be true… oh god. Not another one… why?”

The elf studied her face. He didn’t say anything.

“Why does this keep happening to me?” She looked up at him. “I can’t possibly be this unlucky…”

“I don’t know what to tell you, human,” he said with a nod, his expression serious.

Cordelia sighed. “Well, let’s hear it then. What is this curse?”

“Your life will belong to the beings of the glade. You’ll need to make them laugh, and, uh, bring them cookies. You don’t want them to be bored with you, because then…” Suddenly, his voice broke off.

He let out a loud snort.

Cordelia’s eyes widened. He was laughing at her.

“I’m sorry,” he said in between giggling. “I can’t go on… you should see your face. I can’t believe you fell for that. I mean, magical creatures demanding cookies? I made that up on the spot.”

“You what now?” Cordelia stared at him.

“I mean, it’s not particularly believable, is it? The glade is kind of magical, but there’s no powerful beings with a sweet tooth here,” He tried to supress his laughter, failing miserably. “Ah, I kill myself. It’s just me here. And some weird fish. A few frogs here and there. I do like cookies though, if you happen to have any on you.”

“I don’t. And you shouldn’t say stuff like that if it isn’t true,” she lectured the elf. “I… I’m already kind of dealing with a curse not too dissimilar from what you described.”

“Wait… the curse I made up is real? Is it real because I made it up? Oh man!” He got distracted, probably thinking of the other curses he could invent. Involving cookies, presumably.

“I don’t think you created my curse,” she corrected him. “I’ve had it for years. It’s these little fairy-like things, sprites… you ever heard of them?”

She tried to gauge his reaction, hopeful.

“Can’t say that I have,” he shrugged it off, to her disappointment. “What do they do?”

“I don’t really want to talk about it.” She deflected. “I’m kind of hoping I’ve managed to shake them off, coming here.”

“Well, I’ve never heard of them so you’re off to a good start.” He said encouragingly.

“Anyone ever told you that you’re kind of a buzzkill?” The elf asked.

“Hm, food for thought. For you, I mean. I’ll settle on the cookies. And fruit.” He added, already seemingly forgetting their exchange. He seemed easily distracted.

“Anyway, if you’re wanting to lay low for a while and hide from these sprite things, you’re welcome to camp in my meadow. For a few days. Not like, forever.” The elf offered.

That took an unexpected turn. “Really?”

“Sure. I’ve even got a tent around here somewhere, I’m pretty sure. You like leopard print? I hope you do, because that’s what I’ve got.”

He dashed towards the house, rummaging in a chest.

“I didn’t pick this myself, of course.” He explained, finally locating the tent and pulling it out. The dust made him cough, so he the the tent towards her. “It belonged to a traveller who came here some time ago, but she mysteriously disappeared in the middle of the night. She was probably eaten by… ok, ok, I’ll stop.” He said quickly when she shot him a glare.

“It’s my friend’s,” he admitted. “But she hasn’t come over here in a long time. She’s pretty busy with important things like keeping the world from collapsing and what not. Excuses, excuses. Anyway. I’m sure she won’t mind you borrowing it.”

“Right. Well, thank you. That’s kind of you.” She told him, appreciative.

“Make yourself at home. As for me, I need to get my beauty sleep. It’s kind of late. The sun never fully sets in Sylvan Glade, you see, but you do get tired. You’ll get used to that.”

And with that, he twirled around and went inside his little crooked house.

Cordelia looked around the place. She finally spotted the waterfall that she’d heard when she first entered the Glade. It flowed into a small pond filled with colourful fish. To make the scenery even more picture perfect, a rainbow spanned across the pond.

Well, it could definitely be a lot worse, Cordelia chuckled to herself softly.