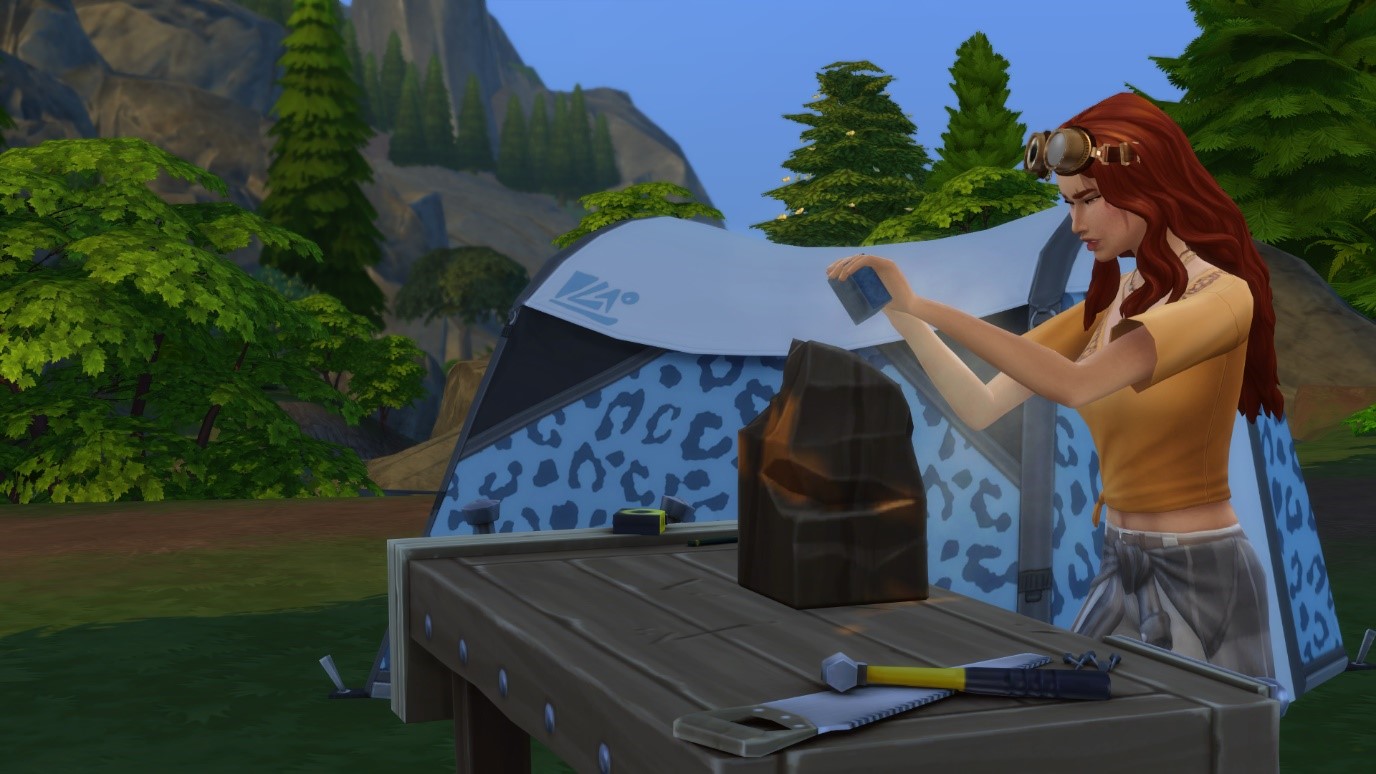 For the first time Cordelia could remember, things were good. Settled.

She was able to buy the tools basic woodworking tools with her first paycheck. It was good to be working with her hands again – her obscure hobbies as a lonely teen had finally come in handy. She could create a home for herself. It was only the beginning of a slow process, but she was determined. The first thing she made was a bench, so that she would finally have somewhere to sit when she was roasting her food.

Dandelion, who had become a regular at her little campsite, still preferred sitting on the ground. The elf made her laugh so much she’d be in tears sometimes. The last of warm summer’s evenings went by pleasantly in his company.

Of course, the fact the sprites had been a no show in weeks had something to do with that as well. Cordelia could finally think straight. Actually be in the moment for once.

And her days at the shop were progressing well too. She was getting more familiar with their merchandise (though ironically, familiars were the one thing she still couldn’t get her head around), and Grace even started to let her help with the potion making too.

“Three swirls counter-clockwise,” the spellcaster instructed her. Grace was leaning so close to the cauldron the tip of her nose was almost touching it. “You got it!”

“Who would have thought, seems you’ve turned our human friend into a little sorceress, Grace.”

Cordelia jolted at the sound of the voice, dropping the large wooden spatula into the cauldron. Clutz, she cursed herself under her breath.

“Morgyn. To what do we owe the honour?” Grace raised an eyebrow. She did not sound particularly honoured. “We don’t have any standing orders for HQ that Darrel forgot to tell me about, do we?”

“Because it would be worth my time to pick those up personally,” Morgyn snorted. “No, actually I’m here to check on Cordelia.”

If Cordelia hadn’t dropped the spatula already, she most definitely would have now. That potion of good fortune was definitely ruined…

“You are?” She stared at Morgyn. It dawned on her that not only was she the reason the sage was here, but that this also meant checking up on her was more important to them than a potential order for the magical headquarters. What did that mean?

From the look on Grace’s face, she seemed to be wondering the same thing, but she didn’t say anything.

“I wanted to see what the progress was with your… condition. Put perhaps we could discuss this somewhere else,” Morgyn added, noticing the curious look on Grace’s face.

Cordelia turned to her co-worker: “Do you mind if I-“

“Your shift is almost over anyway,” Grace nodded. “I’ll wrap up here. Since the sage requests it.” Cordelia galloped out of the store right behind Morgyn.

Cordelia’s brain was goo. After their last exchange, the last thing she’d expected was the sage personally paying her a visit. She tried to compose herself.

“So you wanted to know-“

“Wait,” Morgyn interrupted her. “Not here. I have somewhere else in mind. Somewhere fun. Hold on to me.”

She awkwardly placed her hand on Morgyn’s back.

“Transportalate!” The mage yelled. A beam of light opened up above them. Then it was all Cordelia could see. And then…

“What just- where are we?” Cordelia struggled to form a sentence together. The magical beam had subsided, but her senses were overwhelmed. She heard music. Saw skyscrapers. Rose petals. And was that a wedding arch?

“San Myshuno, the city that never sleeps. And no, I didn’t bring you here to propose.” Morgyn laughed, noticing Cordelia’s eyes lingering on the arch. “They must have one of their festivals on. I think this is the romance one. That will do nicely.”

Cordelia had never been to a city. The tall buildings and bright signs surpassed her wildest dreams. Who would have thought she was just in the little shop in the middle of the woods a few moments ago?

“So, how did we get here? Are we really here? Wait – I thought there always had to be three sages in the magic realm!” Her mind was racing.

“Living in the magic realm.” Morgyn corrected her. “We’re not on house arrest. Most certainly we can take little trips for business or pleasure if we don’t stay away for too long.”

“And which one is this?” Cordelia wondered out loud. “Business or pleasure?”

“If life doesn’t bring you pleasure, you’re living it wrong.” Morgyn told her. “As for business, I think if your sprites show up, this place should be perfect to amuse them, wouldn’t you say? Shall we have a look around?”

She couldn’t believe it. A few weeks ago, she was the village outcast, nobody in Gibbs Hill would even talk to her… and look at her now, in the centre of a metropolis, at a romance festival with an all-powerful spellcaster. With no sprites following her every move. It seemed almost too good to be true.

They wandered through the stalls. Perhaps they could buy a snack from one of the vendors, Cordelia thought. Or try that tea from one of the fountains that everybody seemed to be drinking from.

“Uncover your romantic destiny! Is love truly meant for you?” A woman called out to them.

“Can you really tell?” Cordelia turned to the woman. “How do you know?”

“I’m the romance guru, I have a gift to see… A love powerful enough to last a lifetime will burst right through your aura!” The woman told Cordelia. “Just give me your hand, dearie, and I will tell you what your love life holds…”

The romance guru traced the palm of Cordelia’s hand. A look of concentration was spread across her face, but she didn’t say anything.

Cordelia was starting to get nervous. “Do you see… anything?”

“I’m sorry dearie, it might not be what you want to hear.” The romance guru hesitated.

“I get a strong sense that the man you are here with might just be the love of your life, but I’m afraid I’m not sure if you’re the love of his.”

Well, that was awkward. Cordelia felt as if she was being dumped, without even being in a relationship.

“That sure was insightful,” Morgyn interrupted the romance guru sarcastically. “We’ll be on our way now.”

Just to top it off, their hands brushed against each other as they turned around.

“The look on your face…” Morgyn chuckled. “Cordelia, you do realise that the romance guru has no real magical powers? I can guarantee you she couldn’t see anything bursting out of your aura.”

That made her feel a little better. “How can you be so sure?” Was it a sage power, to detect one’s magical ability?

“Well, for starters, I wouldn’t exactly call myself a man, so she already missed the mark there.”

Cordelia had gathered as much. It hadn’t escaped her attention that everyone in the magic realm, and even Dandelion, always used the words they or them when they spoke of Morgyn. She wanted to know more, but she wasn’t sure how to ask. “What would you call yourself?” She asked finally.

“The world is far too complex to try shoehorn everything into two boxes. Good or evil, male or female… it’s not as simple. I am non-binary. I am… untamed.” Morgyn’s eyes twinkled.

Cordelia had never met anyone like Morgyn, but she was painfully aware that her world had been small. “I like that.” She smiled.

There was a mist in the air. It had started to rain, she realised. Perhaps the warm days of summer shorts had come to a close.

“You’re shivering.” Morgyn noticed. They wrapped their hands around each other for warmth.

It was a perfect moment. The city around them was noisy, but Cordelia couldn’t really hear it. It was just two hearts beating.

“Tell me, the sprites, have they been bothering you a lot lately?” Morgyn asked.

“No.” She confessed. “Your trial of elements, I think it worked! I haven’t seen them since. I think… I think that maybe you really have broken my curse. You saved me.”

Cordelia looked into Morgyn’s eyes, and decided to take the plunge. She took a deep breath and leaned in for a kiss.

It felt like watching someone else’s life playing out in front of her eyes in slow motion. But she could feel Morgyn’s hands pushing her away.

For the first time since entering the magical portal, she wished she herself was a spellcaster, so that she could make herself disappear.

Each word made her die inside a little more than the one before it. As much as she knew it was silly, she couldn’t help but cover her face with her hand, like a child thinking they are invisible when they close their eyes.

“Nope, I can’t even look at you.” She interrupted. In a move she knew all too well was absurd, she tiptoed behind Morgyn and buried her face into their back. It was strangely comforting.

“Cordelia, you didn’t do anything wrong.” Morgyn tried to reassure her.

“Except that I did… I completely misread the situation. Listen, can we just… go home and pretend this never happened?” The girl pleaded.

Morgyn sighed. “We can. You’ll need to hold on to me again…”

That was the last thing Cordelia wanted to add to the mix, but of course, it was the only way for them both to teleport back to Glimmerbrook. It wasn’t exactly like they could just walk…

Morgyn dropped her off at her camp, but quickly proceeded to wish her good night and disappear in yet another beam of light, poofing into thin air.

And to rub it all in even more, while San Myshuno may have graced them with a light drizzle, all that greeted her home was pouring rain. You’ve really outdone yourself, Cordelia thought.

She spotted the old tree with the passage to Sylvan Glade glowing in the distance.

Climbing up the rickety steps up to Dandelion’s house, Cordelia cursed herself, muttering indistinctly. She knocked, but let herself in immediately after.

“Dandelion! Are you awake?” She whispered.

“I woke you. Great job, Cordelia.” She rolled her eyes, frustrated by herself.

She sat down beside him. “I made a complete fool of myself in front of Morgyn.”

“I take what I said back, totally not worth waking up over.” The elf told her off.

“Who cares about Morgyn?” Dandelion shrugged.

“I do! At least, I think I do,” Cordelia was already confused. “I… I tried to kiss them. And I got rejected.”

“I think you’re too good for Morgyn anyway. So it probably worked out for the best. And I also think-“

Dandelion didn’t finish his sentence. Instead, he plunged forward, tickling her. Cordelia giggled away.

“Dandelion, quit it!” She protested in between her fits of laughter.

“Will you quit talking about stupid stuff? And stupid people?”

“I will, I promise.” She squealed, finally prompting him to stop.

“Ok.” The elf beamed at her gleefully. “See? Much better.”

She leaned in towards him, softly nudging his shoulder. “You’re a good friend, Dandy.”

“I know! Can we go to sleep now?” He yawned again.

“Yeah. I’ll head back out.” She remembered the rain, and her tent, letting out a sigh.

“Just stay over,” he suggested, as if he’d read her thoughts. “As long as you stick to your side. Back when Lulu and I were little, she always tossed and turned and threw her arms everywhere when she slept. Never got a good night’s sleep!”

“I’m a pretty constrained sleeper,” She promised. Dandelion nodded and slid under the blanket. She climbed over to the other side of the bed. She wasn’t sure if she’d be able to fall asleep after today’s debacle, but she wound up drifting into sleep as soon as her head hit the pillow.