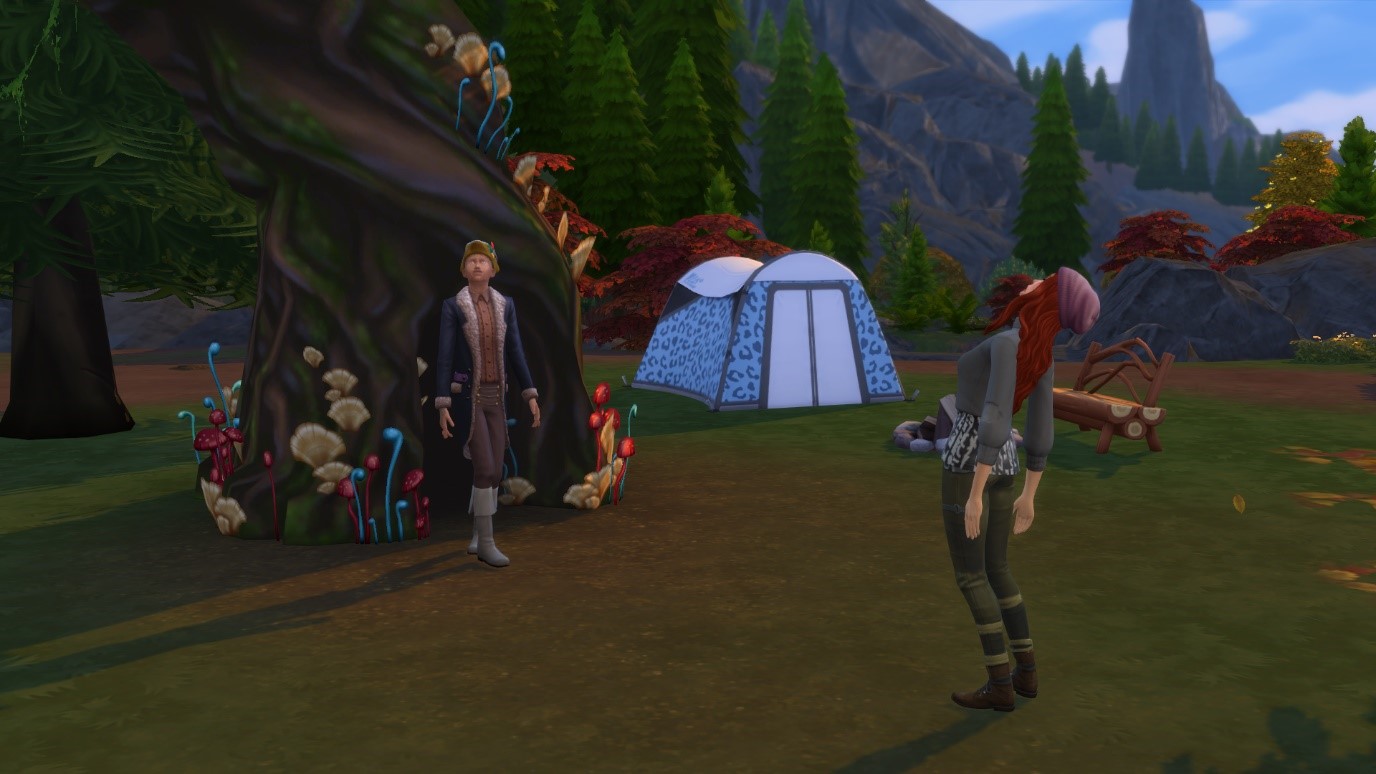 “Wait… I thought you said people wouldn’t be dressing up for Spooky Day!” Cordelia pulled a face when she saw Dandelion emerge from the tree trunk. The outfit he was sporting would definitely fit in ye olde times, and the pointy hat with colourful feathers was worthy of a pirate… a successful one, Cordelia thought.

“What do you mean?” Dandelion asked. He didn’t wait for her response, strutting right to the path towards the portal.

Cordelia dashed after him. “I mean your getup, of course, Captain Hook!”

“Who’s that?” The elf looked at her quizzically.

“If you mean my coat and hat, well I’m wearing those since it’s gotten colder, dummy.” Dandelion enlightened her. “You’ve got yourself some warmer clothes too, didn’t you?”

“Don’t be silly.” Dandelion shrugged her concerns off. “Who cares what you’re wearing! The fair will be so much fun!”

She smiled at her friend softly. By now she’d learned not to take offense at his remarks. “I’m sure it will be, Dandy.”

A part of her was a little anxious about what would happen on the other side of the portal that night, but she kept that to herself.

They found the fairgrounds through another portal within the magic realm, not far from the gardens. Dandelion babbled on about some place called Casters’ Alley being around the corner, but Cordelia was not sure what he was on about. There was too much to see to take in what her friend was saying properly.

She considered the magic realm outlandish on a regular day, but this was something else. The stalls and lanterns were distracting, but Cordelia still noticed the fact that half the buildings and the furniture within seemed to be amid floating into space. Neither Dandelion nor the spellcasters around seemed to pay it any notice though. Was this considered… normal?

“Neat! This is just like I expected!” Dandelion exclaimed with glee.

Cordelia was happy for him, at least. “It is?”

The elf nodded. “Yeah, I mean, I sort of remember from back when I was a kid, but you know how you big things up in your mind when you are so little compared to the world around you… but it’s just as spooktacular as I hoped!”

“That it is.” She was still taking in her surroundings. Trouble with the magic realm was, she couldn’t quite tell what was real, magical, and what was just a part of the fair… unless there was no such thing as props here, of course… “Sorry. It’s a lot.”

Dandelion bent his back in a little bow. “Not to worry, Cordie. I’ll be your magical guide this evening!”

She took his lead and curtsied with a little giggle. “Enchanted! So where are you guiding me to first, Mr. Guide?”

He looked around briefly. “Err… the bowl of sweets right behind me! I mean, you can’t have Spooky Day without candy, right?”

Cordelia thought back on that evening he attempted pumpkin carving and what he told her that night. She wondered if, in spite of what he was saying, Dandelion did in have plenty of candy-less Spooky Days. But she didn’t ask. “Of course not!” She replied, perhaps a bit too eagerly.

The turned to the bowl. It was overflowing with candy.

“Will my magical guide sample first?” She winked at Dandelion.

“Well, duh! You know how much I love swee- err, I mean, how much I want to guide you through the fair, make sure it’s safe!” He tried to safe face, but his arm was already half submerged within the bowl among all the sweets.

An explosion of fair blue light surrounded them, startling him. He jumped back, dropping his candy, much to Cordelia’s amusement.

“What happened to my brave guide, Dandy?” She chuckled softly.

“Hey, I couldn’t have expected… I was just unlucky that this particular trick was spookier than others, that’s all.” He crouched on the ground, picking up the sweets he dropped and proceeding to stuff them in his mouth. “Candy’s still good, though!”

“Seems only fair,” the elf said with his mouth full.

“Better watch out for all the spooky tricks…” She said out loud, tilting back as if to shield herself in an exaggerated display of supposed terror. She looked at Dandelion through the corner of her eye. He seemed satisfied with her “fear.” She tried her best to suppress laughter. This was too much fun.

She did almost shriek out for real when a giant green arm emmerged from the bowl, tossing the sweets at her. But it was a fake arm, made out of rubber. At least she hoped it was. Either way, they had a good laugh about it.

Maybe she shouldn’t have worried about coming to the magic realm today. The sprites would not follow her here, she was with her friend, and the fair did turn out to be fun… she could barely remember what she was afraid of.

That was, until she spotted Morgyn right talking to some young woman, right by the stall opposite them.

It was one thing for her to chew Morgyn’s head off out in Glimmerbrook, while she was annoyed, late for work, stressed by the sprites and semi-sure she wouldn’t ever need to see them again… and a whole other thing now, in the magic realm, on the sages’ turf.

And then there was that whole other uncomfortable sensation she felt in her stomach when she looked at the girl, seemingly hanging onto Morgyn’s every word.

Cordelia couldn’t make out what they were talking about, but whatever they said, Morgyn then proceeded to launch into what looked like a very complicated spell.

The girl then said something, prompting the sage to laugh. Cordelia did her best to push that ugly feeling down. She’d better get out of there before Morgyn noticed her anyway…

“Dandy, it’s Morgyn… can we go somewhere else?” She whispered to her elf companion.

He raised an eyebrow. “I though you said you liked Morgyn?”

“It’s complicated.” She gave him a pleading look, since he clearly wasn’t understanding her point. “Can we please just… get as far from Morgyn as we can at this fair?”

“Works for me,” Dandelion shrugged. “There’s a roller-skating rink back there.” He pointed somewhere across the fair grounds. “You ever tried it?”

She had not, but was grateful for the out. “Thank you.” She whispered and hurried towards it.

“You ok, Cordie?” Dandelion’s concerned face appeared above her. So she didn’t exactly have a natural gift when it came to roller-skating…

“I’m fine,” she sat up slowly, rubbing her back. The achiness was hardly her biggest concern.

“There you are!” A distinct high-pitched voice echoed from the end of the skating rink.

L Faba swanned in with a huge grin on her face. “I was starting to think you were hiding from me, Dandy!”

“Lulu!” Dandelion let Cordelia to her own devices as she attempted to stand up and rushed towards his sage friend. “Why would I be hiding from you? I came here to see you!”

Cordelia grew acutely aware of what a third wheel she turned into in that instant, seeing the old friends hug. The first time she’d seen them together, Dandelion was so focused on helping her with her own sprite predicament, but not this time. She didn’t understand. If they truly had missed each other so much, why spend so much time apart? Why did Dandelion celebrate holidays alone? She didn’t get it.

“Uh, hi,” Cordelia waved at the sage awkwardly, breaking up their little moment. Dandelion clearly cared about L Faba. Perhaps they could turn a new leaf, for his sake. Perhaps their first encounter wasn’t even all that memorable to the mischief sage in the first place.

L Faba glanced at her. She was smiling, but there was something off about it. “Ah, you brought your pet.”

“Cordie’s not a pet, Lulu! She’s a human. More importantly, she’s my friend. Like you.” Dandelion told her enthusiastically.

“Sure she is,” L Faba’s smile had not left her face, but Cordelia noticed her eyes looked cold. “We’re all friends here, aren’t we?”

“Speaking of mutual friends, how’s Morgyn been getting along with resolving your little sprite issue?” L Faba asked. Cordelia couldn’t decide if the sage genuinely cared or not.

“I… they… I think the sprites have a will of their own,” Cordelia settled on a safe response. She couldn’t quite place a finger on why, but something about L Faba’s question felt insincere. “Dandelion has been a real help with them, though.”

“Oh, has he?” L Faba’s eyes narrowed ever so briefly. “Well, that’s our Dandelion… anyway, what do you think of the fair, Dandy?” She turned to the elf.

“Oh it’s awesome!” He enthused, wide-eyed. “I’m so glad you invited me! We’ve had these cool spooky candies when he got here…”

“Actually, Dandy, would you be a darling and bring me one of those? Or a few… you know how much I love candy…” L Faba said sweetly.

Dandelion didn’t hesitate. “Sure! Do you want any flavour in particular?”

“Surprise me… why don’t you pick a few you think I’d like? I bet you can choose just the right ones…”

Even with Cordelia’s limited life experience, she knew the sage was up to something. But what? Dandelion was oblivious, though. He galloped away happily, probably already thinking about what sweets his friend would like the best.

L Faba didn’t waste any time. Sure enough, as soon as he was out of sight, her fake smile dropped.

“You… I don’t know what you want with Dandelion, but you’d better keep away from him!” She told, no, commanded, Cordelia.

So much for that new leaf, Cordelia thought. L Faba was clearly not interested in getting to know her, let alone being friends. The thoughts of Dandelion’s loneliness back at the pumpkin station rushed back to Cordelia. Who did this woman think she was?

“What, like you have?” She retorted. “You’re so quick to point out all of my flaws, but I’m not the one who’s left him all alone in that meadow!”

The words came out angrier than Cordelia had expected, but she didn’t try stop them. “Do you realise how lonely he had been in Sylvan Glade, while you were busy doing your important sage-y stuff? You called me high and mighty when we first met, well maybe you should take a look in the mirror!”

Her cheeks were burning. She knew this whole yelling at sages habit couldn’t end ell, but this time, she didn’t care. Going off at L Faba may have been just as risky as screaming at Morgyn, but she had a better reason this time, a reason far bigger than herself. And she’d be damned if she let Dandelion be used by this woman.

“How dare you!” The sorceress was shaking. “You don’t know the first thing about me! But you will learn. You’ve made a big mistake. Maybe you think you can get away with anything because Morgyn finds you quirky – for now – but I am not Morgyn. And you will regret the day you’ve made me your enemy!”

Cordelia subconsciously took back a few steps. L Faba was a sage of mischief. Mischief was not as dangerous as untamed magic, was it? Cordelia wasn’t sure. She didn’t really know enough about either of the magic schools. But she hadn’t expected this outburst of venom.

L Faba took a deep breath. “I really don’t have to deal with you.” She was no longer yelling. In fact, her voice was eerily quiet. “I can just make you go away.”

Cordelia kept backing away, but it was too late. The mischief sage already had her wand out. The last thing Cordelia could remember was hearing her call out the word deliriate. And then the world disappeared in a haze.