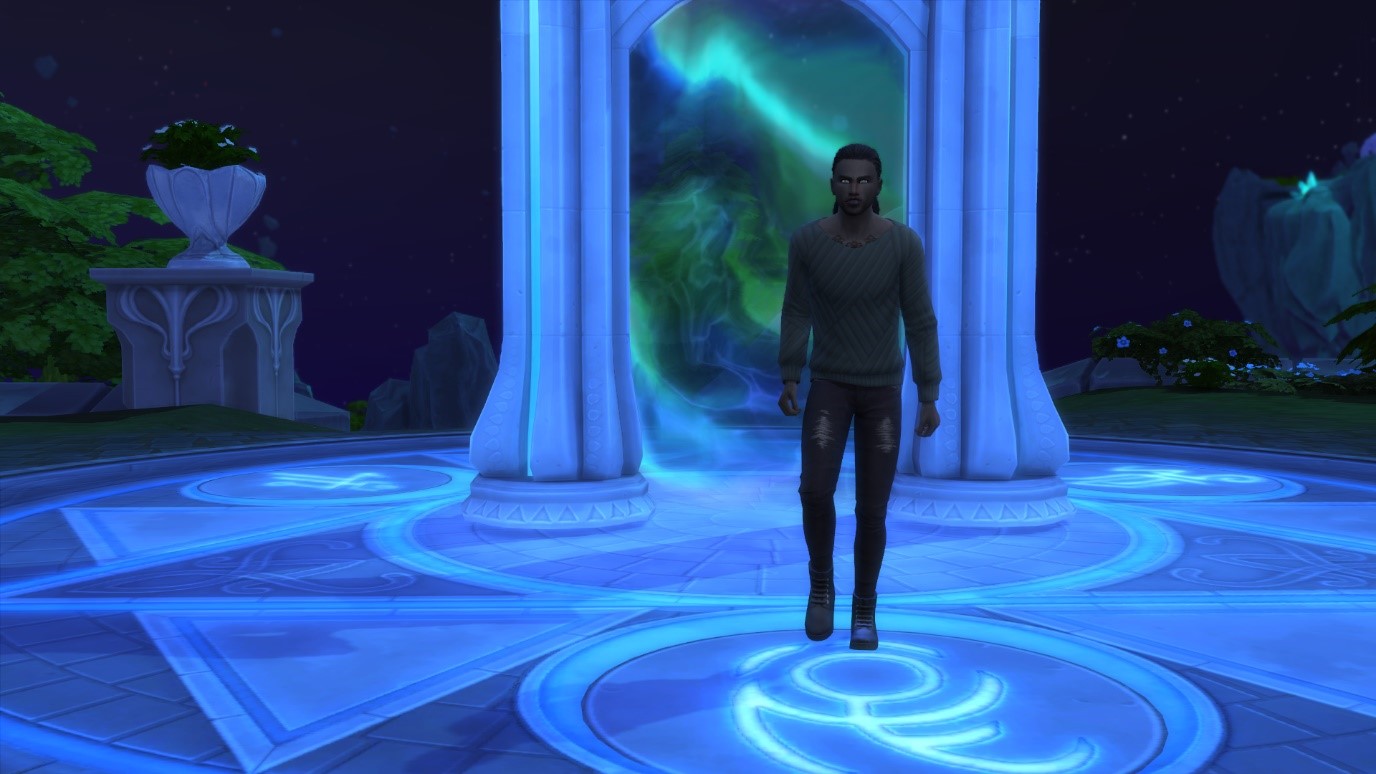 Micah stomped through the portal into the magic realm. He wondered if he’d ever felt this out of control. When he left Cordelia’s house, he was filled with despair. The way she looked at him, the pain in her lovely face. Her words rung in his head.

That’s not fair. Why would it all my fault?

But despair quickly turned into anger. At Morgyn… and at himself.

None of it was her fault, obviously. He hated that he made her feel that way. Like she was to blame for any of this mess. She was right. If he hadn’t agreed to Morgyn’s insane proposition, none of this would have happened.

It was his own goddamn calculating. Always trying to get a step ahead of the sage. Micah had been so sure Cordelia would never say yes. If he appeared to comply, show goodwill, Morgyn would be in his debt, without Micah actually needing to give them anything at all. Tipping the balance in his court again, so to speak. Seemed like a good idea at the time.

But now Cordelia had fallen victim to this never-ending power play between him and Morgyn. Of course there was no chance she would actually get pregnant, no way in hell could a dead man produce life. But to have her fall for him?

It was bad enough his own feelings had been tampered with, but the matter of fact was he’d been all over the place for the last year. He could handle it. After all, he was a vampire, and vampires barely had any emotions at all. But Cordelia was too… everything. She deserved so much more than this. Didn’t matter if that was the spell taking over him, Micah knew that much was true.

The worst part of it all was that he had enjoyed the twisted game him and Morgyn played. Always trying to get more leverage, to be the one with the upper hand in this relationship… It got so addictive. But why? Arguably, the times when they both put all of that aside, however rare and brief, were the best ones he’d had with the sage. What was wrong with him?

It didn’t matter. Just one more reason this whole thing had to go away. He could not let Cordelia suffer any more because of him.

He entered Morgyn’s room without knocking, though the sage didn’t seem phased, taking their time to apply their lip gloss.

“Welcome back.” Morgyn greeted him with a crooked grin once they were finished.

Did they just find all of it amusing, Micah wondered? Definitely seemed like one big joke…

“Why would you do this?” He lashed out before he could stop himself.

“I told you my intent. You agreed.” Morgyn reminded him, their voice infuriatingly calm.

“Not to this! Not to emotions being manipulated! Mine and hers. I would have never agreed if you told me what exactly it would involve!”

Pull it together, damn it, the vampire scolded himself.

Morgyn closed the lid on the lip gloss, placing it back onto its tray before turning back to him.

“Don’t be so dramatic, Micah. The love spell is a bonus. Are you telling me you shared a house with her, got to know her, and never wondered?”

This was a lost cause. Micah decided to get straight to the point. “The love spell, can you undo it?

Morgyn tilted their head slightly. “Would you really want me to? She is quite lovely.”

“She is, I’m not.” Micah said. “The last thing Cordelia needs is a vampire and a murderer to love. Can you undo it?”

“You should really give yourself some credit, Micah, you’re much more than that.” Morgyn replied. They sighed, growing more serious.

“It can’t be undone, per say. But I know for a fact that the one it has been cast on can break it.”

Break it. Didn’t seem quite the same as making it disappear altogether, but better than nothing, Micah thought. But if it had to be done by the person the spell was cast on rather that the caster, was that even possible?

“How? Neither of us is a spellcaster.” He pointed out, trying to calm down.

The sage stood up. “It’s not easy, but it’s not laborious. Doesn’t even require magic. After all, people fall out of love all the time. It’s merely a matter of willpower. The choice is yours.”

Micah’s efforts to regain some level of cool flew out of the window with that statement.

“The choice… this is madness! Whatever happened to the talk we had in the ruins? You said you choose me.”

“And that still stands.” The spellcaster nodded. “You wanted me to choose, I did. This is nothing to do with me. I’m certainly not going to ask you to choose.”

“Of course not. Because I don’t have a choice over anything, do I?” Micah spouted. “Including the way I feel!”

Perhaps today, he would not hold out on the sage after all.

“Funny that.” He snapped at Morgyn. “Having a choice was the one thing you promised me when you asked me to stay in Glimmerbrook. Turns out you’re no different from Verena after all.”

“Yes! Breakable or not, you should have never cast the spell in the first place! If you can’t see that, I don’t know what else to say.”

Could Morgyn even hear him? Micah didn’t feel like yelling anymore. His anger was replaced by something else.

Hurt, the vampire realised. It shouldn’t hurt. His relationship with the sage was just supposed to be a mutually beneficial agreement. Supposed to be.

The irony. Took getting to this moment to finally admit to himself that there were times he’d felt like Morgyn understood him more than anyone in the world could. Only now, when that understanding was shattered into pieces. Or perhaps it had never really been there at all, an illusion.

But a loss of something you never had shouldn’t feel like this, should it? It all left him dumbfounded.

Morgyn’s mood seems to have shifted as well. They finally spoke.

“Perhaps it’s you who needs to see.” Their voice was quiet, sombre. “Tell me Micah, had there been no love spell, do you truly believe falling in love with Cordelia would have been out of the question for you?”

Another place Micah was not ready to go tonight. Or ever. He wished he could just go back to being angry.

“That’s beside the point.” He said sharply.

“Is it, though?” Morgyn asked. “Even I didn’t expect you to pounce on each other like that. Could have bought her dinner, at least.” They added with a smirk.

Micah could feel the irritation bubbling back up again.

“You’re impossible! You were the one who cast the damn spell.” He shook his head.

In a strange way, a part of him was grateful that Morgyn chose to return to snide remarks. He could handle those. Snap back. Perhaps that’s what their bond was based on. A mutual appreciation of shallow waters.

“Infatuate is a love spell, not a sex spell.” The sage elaborated. “I was quite prepared to continue playing the long game. It was the two of you that decided to cut to the chase. Would almost seem as if you’ve been dying for an excuse to do that, don’t you think?”

Was Morgyn trying to provoke him? Micah didn’t know anymore. Too many thoughts in his head. Too many emotions. He had to get out of there.

“I don’t have to listen to this.” He hissed.

“You don’t.” The spellcaster agreed. “That’s precisely the point. You don’t have to do anything. I didn’t give you an order, I gave you an avenue to explore.”

Morgyn paused for a moment, as if they were deliberating whether to add something.

“When you moved to Glimmerbrook, you said I’ll own you.” They said finally. “I’m doing the opposite of owning you. The spell has set you free of me. If you wish to come back, with or without Cordelia, I’m here. But the choice is always yours.”