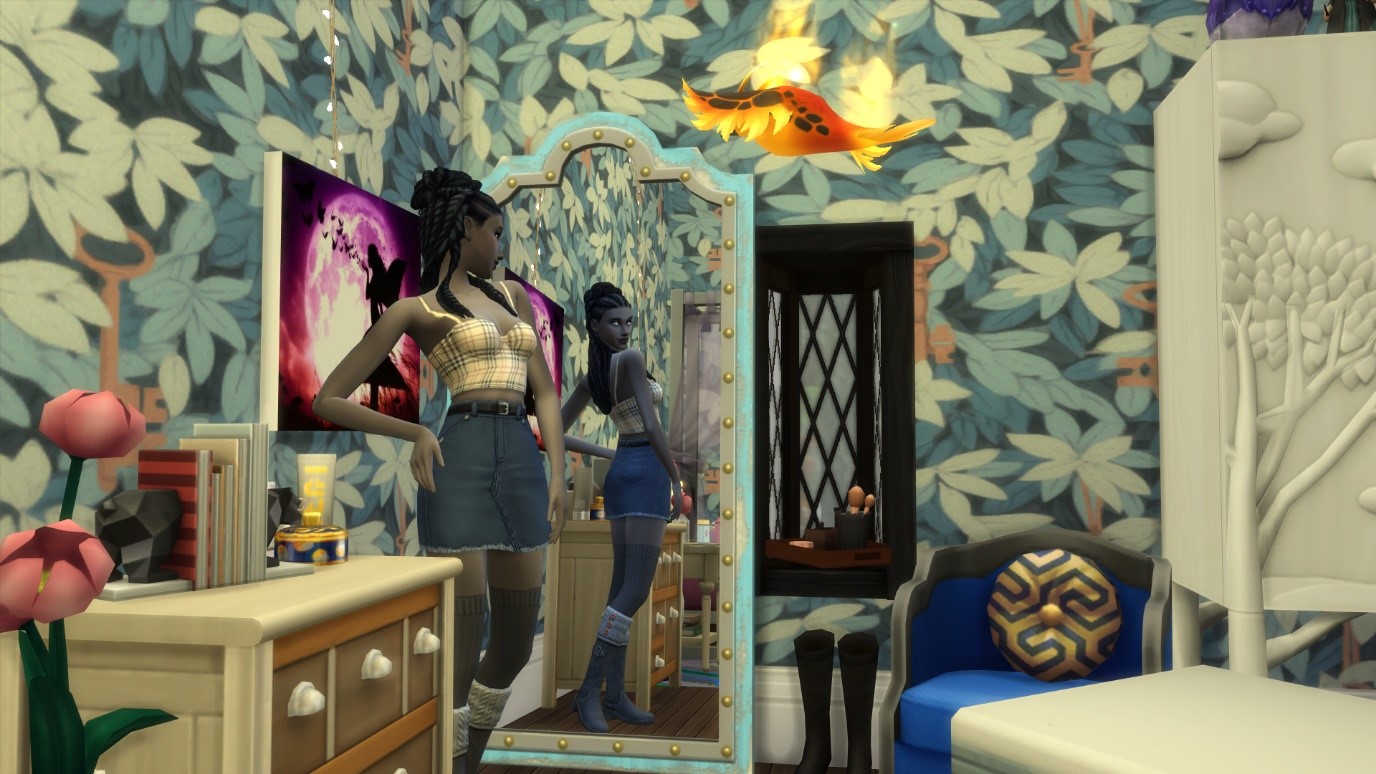 Too much cleavage? Yep, definitely. Which is kind of the point. Still, don’t want to scare him off… Ugh. This shouldn’t be so hard. Or perhaps, if it was hard, I wouldn’t have a problem, I smirk to myself. Better not say that kind of crap in front of him.

I settle on wearing a leather jacket over the top – should still do the job, but is a touch more modest. I creep out of my room in a rush. The sun’s still out, just about, but I don’t want to take any chances of running into dad. I can’t imagine he’d be impressed with the amount of boobage I’m showing. I’m sure I can get changed again before we set off.

Anyway. Definitely dying to get there, and do my own thing for a change. Glimmerbrook is so damn small, and everyone knows who I am. Once I’m in Britechester, I can do whatever I want. Kind of.

The cringy talk dad gave me in the morning before he went to his coffin creeps up on my mind. He went on and on about restraint and regrets and all sorts of bullshit, with that constipated look of agony he has whenever he talks about this stuff.

Honestly, I zoned out halfway through. What’s there to know? Don’t kill anyone is the gist of it, right? I just look forward to actually getting to drink blood. Not that dad needs to know that’s what I intend to do.

Dad’s always maintained that once you drink it’s too difficult to stop, but I’m not so sure I buy that. All this shit he says about it needing too much restraint… I know everything there is to know about restraint already. I grew up around Dandelion, after all.

All this time and I still remember how good his blood tasted, how close I felt to him. And did I ever try to drink it again? No. As much as I wanted to. The fruit helps, as diluted as the stuff is. But the rest of it is on me. So who can say I don’t know enough about restraint?

For a fact, I did not feed on a single person since. More or less. Can you really count accidentally biting Ollie when things got a bit hot and heavy? I don’t think so.

He was such a wuss about it. Can’t believe I dated him. Sure, most people’s first boyfriends leave a lot to be desired, but I cannot stand a wimp. Dumping him on the spot was the best thing I’ve ever done.

Another good reason to move on to pastures new. Glimmerbrook’s dating pool is pretty dried up by now. I’m ready for something different. Ok, that’s a lie. I did just spend ages getting all dressed up for him. But that’s different. Because no matter what, he’ll never go for me, will he?

Oh shut up, Hawthorne. You can’t go over there with this attitude. You’ve got everything going for you tonight. He’ll be sad you’re leaving. Just ask tell him you want a big send-off and… Fucking hell. If this was any other dude, this would be easy. But of course the one I actually want is so unattainable.

But how could anyone else ever match up?

If they didn’t want me to get obsessed with Dandelion, maybe they shouldn’t have fed me fruit that was made using his blood my whole life. He’s so damn perfect I want to cry.

And somehow, he’s perpetually single. I don’t get it. As far as I know, the only person he’s dated is Ollie’s aunt, and she seems like a giant cow. Figures.

Good timing, he’s just walking out of his kitchen. He notices me as he’s walking down the stairs and smiles.

“Hey, little sprout!” He greets me when he gets closer. I groan inwardly. Not the best start.

“I’m a bit big for that nickname now, don’t you think?” I nod down to my chest so that he can’t miss it.

“You’ll always be a little sprout to me.” His words sting.

My phoenix joins us. He must have followed me through the tree.

“Hey, Smokey. You know, you do need to get used to me not being around from now on…” Not exactly like I can bring a bigass flaming familiar following me around campus, can I?

“I can look after him for you.” Dandelion offers. Of course he does. He always takes on everybody’s problems. Pretty much a saint. Doesn’t help this whole crush thing one bit.

“Thanks, Dandy.” I smile. “He’ll like that. Anyway. This is a private conversation, Smokey. Go find the sprites or something.”

The phoenix flies off towards the waterfall where Dandy’s sprites like to hang out.

“So, big night, huh?” He says before I manage to make my next move.

“That sounds so final!” Dandelion laughs. “Won’t you be back for Winterfest?”

“Well yeah, but that’s months away! Are you saying you won’t miss me?” I pout.

His smile makes me melt. “Of course I’ll miss you. I doubt you’ll have time to miss me, though. And you’ll see me again before you know it.”

“Well, I still want a memorable goodbye.” Balls. Sounds a lot more annoyed than seductive once the words come out.

“What did you have in mind?”

He looks like he regrets asking almost immediately, but there’s no chance I’m letting that slide.

“You know what I have in mind.”

“Hawthorne.” He puts on that stupid tone, as if he was talking to a child. “We’ve talked about this. It would not be right. You’re a kid.”

Ok, fine, this is totally negating my point.

“You’re right.” I try to sound calm. “We have been over this. And last time, I did the math, I worked out that with how long elves live, we’re almost the same age right about now, if you think about it in proportion. And my math always checks out. I’ll be doing a Physics degree, remember?”

“Well there’s more to it then math,” he tells me all too brightly. “I still remember you waddling around Sylvan Glade when you could barely walk, pooping your diapers. I think that officially makes me too old for you.”

What a great visual. Is there any way I can recover from that?

“I’d hope not,” he laughs. “But you know what I mean. Not to mention it would be weird with Cordie.”

I roll my eyes. Great. Bring mum into the picture, awesome. What can I say? Hey, I’m a younger, improved model?

“Yeah, yeah, you had the hots for mum way back, whatever.” I make extra effort to sound dismissive. “It’s the same thing as when I had a crush on my teacher when I was 14, until I realised that Mr Collette was actually too old for me, almost definitely not straight and, oh, hates our family or vampires or whatever.”

Dandelion lets out a chuckle. “I don’t think it’s exactly like that.”

I really don’t want him to delve into what his old crush on mum was like. I know. I felt it. I didn’t get it back then, when I drank his blood, but I replayed his memories in my head over and over growing up, and eventually, I understood. Might be that Dandelion himself only really understood around the same time I did. I don’t know. I try not to go near the subject with him.

I look into his eyes. “Do you have any idea how frustrating it is when the person you want to be with doesn’t even give you a chance, and keeps insisting you’re a child, no matter what?”

His expression changes. Takes him a while to reply. He finally clears his throat.

He almost looks sad. As if he has a right to. He’s the one rejecting me.

“Besides, with all the new people you’ll meet when you get there, I’m sure you’ll forget about crummy old me in no time.” He adds, putting on a weak-ass attempt of a smile.

“Maybe I will!” I snap at him. A sharp hissing sound comes out.

Shit. I need to get out of here. I turn around and stomp for the tree.

“Hawthorne!” I hear Dandelion’s calls from behind me. “Wait! Do you really want this to be how we say goodbye?”

“Just shut up! Like you care what I want!”

I wipe my tears just in time, the first person I run into as soon as I emerge on the other end of the tree passage is dad.

He does look at my outfit quizzically, but doesn’t say anything about it, probably too distracted about what a mess I am.

“Period.” I tell him, hoping it will make him too uncomfortable to talk about it any further.

“I’ll be fine. All packed too, so ready when you are.” I add, trying to change the subject.

He doesn’t seem to believe me. Come to think of it, it is a pretty shitty excuse – if I was actually bleeding, he of all people would know.

But he leaves it, thankfully. “Your mum was looking for you. She wants to talk to you before we set off.”

“Take your time.” I can almost feel his eyes on me as I walk in the house. He needs to stop being so damn concerned about everything. Gah.

Now for yet another parental talk, can’t wait. Why can’t my parents just be like Morgyn?

“Don’t do anything I wouldn’t do,” that was their parting advice, word for word. Then they laughed and that was it. Breezy.

But of course a chat with mum will be nothing like that, will it?