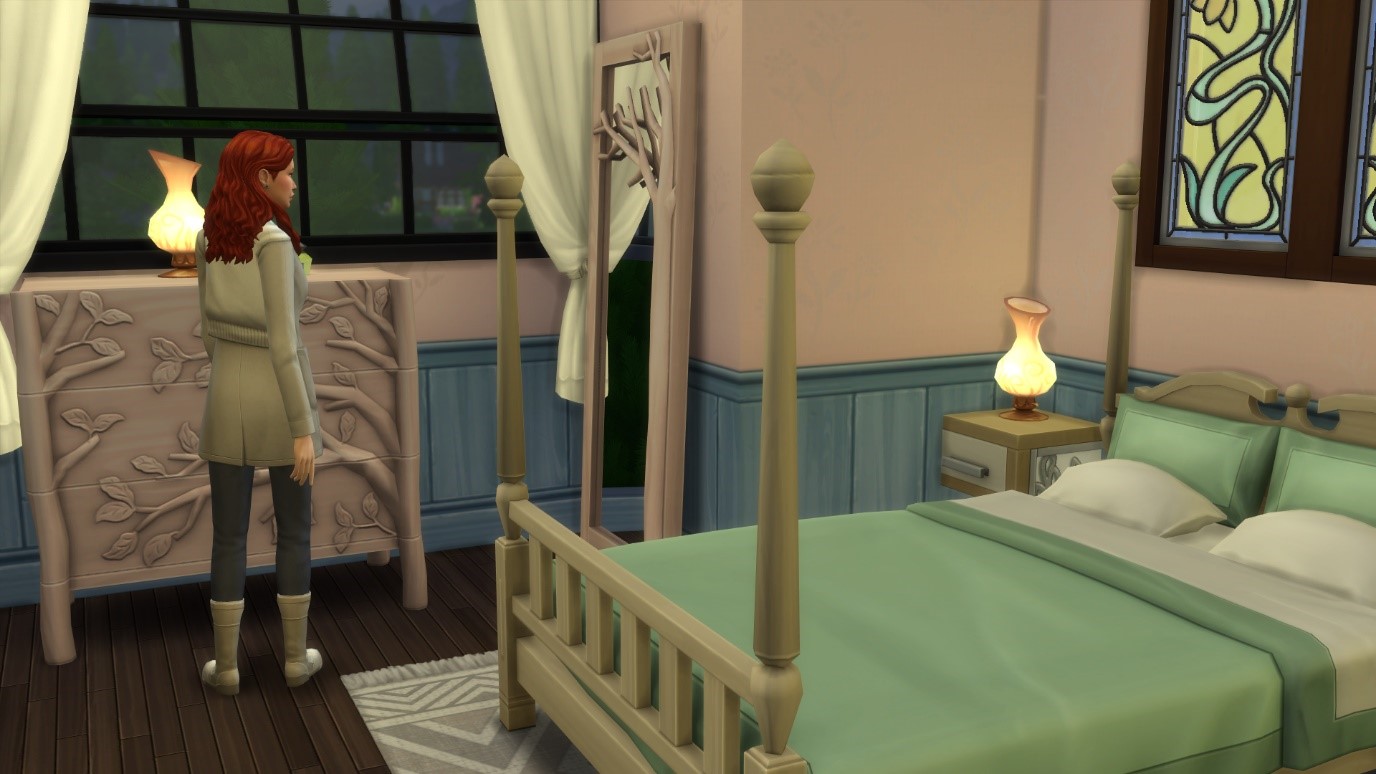 Cordelia took her time getting dressed, glancing out of the window every now and then. It was still dark outside.

She sighed. Nights were so long this time of the year. She’d managed to avoid Micah for the last couple of days, but now that she had to return to work, she had no choice but to get up while it was still dark.

She had no idea what to say to him, after their last conversation. Last thing she had told him was that she didn’t care if he stayed or left. As far as she could tell, he hadn’t moved out. It was difficult to say, he never left much of a trail behind, kitchen untouched.

The day after New Year’s Day, she realised he hadn’t started any new paintings, so she decided to check his room. Ended up staring at the coffin for ages.

She’d never been one for watching her lover sleep – of course, not that she had much of an opportunity for that. Could Micah feel her presence?

She didn’t think so, from what he’d told her, vampires were pretty gone to the world when they were in their hibernating state.

What was she doing? Micah was not capable of sleeping, he was not her lover, and she was gawking at a box.

Cordelia pushed the thought aside as she finally headed out of her room to set off for work. No need to make seeing him even more awkward than it was inevitably going to be.

Which wasn’t going to be long. She wasn’t planning on lingering in the house any longer than needed, she could always just send Ollie to get her some breakfast from town.

There was no sight of Micah in the painting nook, once again, no fresh canvas on the easel.

Cordelia felt oddly annoyed by that. She knew Micah, he painted to deal with whatever he was feeling. And he’d painted nothing at all since New Year’s Eve. So much for his proclamation of supposed love.

Downstairs was dark, quiet, and looking untouched. That wasn’t out of the ordinary, though, Cordelia told herself, trying not to panic.

Or had he actually left? Was the coffin empty the other day? She wasn’t sure if that made staring at it more or less pathetic. Not that it mattered.

If Micah was gone… Her head was spinning. She needed air.

This was ridiculous. There was no point freaking out about him being gone. She didn’t even know for sure if he’d really left. There was one easy way of finding out, though.

Cordelia knew exactly how much supply should be left in there, with what Hawthorne took with her to Britechester.

And then she realised there was light coming out of the shed.

A sigh of relief escaped her lips before she managed to stop herself. Well, he was here. And she was trying to not cross paths with him just a few moments ago, she reminded herself.

But it was too late. He’d spotted her through the glass and opened the door.

Cordelia quickly looked away. It was only then she started paying attention to the shed itself.

“Where is the fizzing machine? And all of the plasma juice?” She blurted out. “Hawthorne might need a new batch soon…”

“Not with the amount you sent her off with, she won’t,” Micah chuckled under his breath. “If her first semester is anything to go by. Seems she doesn’t need as much as we’d thought.”

Cordelia ignored him, looking around the shed.

“It’s in Sylvan Glade,” Micah explained. “The machine, the juice, we moved it all. To make room for the woodworking bench again.”

She stared at him blankly. “We?”

“Dandelion helped me.” Micah clarified. “I went over to ask if he’d mind us storing the fruit in Sylvan Glade instead of here, and he offered to give me a hand.”

“So… what do you think?” Micah gestured around the shed.

Seemed bigger without all the machinery and crates. All that was really in was that old woodworking table. Micah must have brought that down from the attic.

“I figured you’d want it to be more of a blank canvas to make it your own.” He added, sounding unsure of himself. “That maybe you’d want to fill the room with things you made or-“

“I think you and Dandelion wasted your time. The shed was fine the way it was.” She said stiffly.

Micah looked hurt for a moment, but recovered quickly.

“If you ask me, Dandelion was looking for something to do.” He objected. “I’ve never seen him this preoccupied. But he wouldn’t tell me what happened. I think-“

“Micah!” she stopped him from straying from the subject. “Dandelion, moving the plasma juice, all of this…” She motioned towards the woodworking bench. “Are you not going to say anything about what happened on New Years’ Eve?”

He gave her a strange look. “I didn’t think you wanted me to. It’s clear you’ve been avoiding me for the last few days.”

Her eyes shot to the floor. She regretted bringing it up. What did she want him to do, exactly?

“I’m not sure there is much to say anyway,” Micah shrugged. “I told you how I felt, you don’t feel the same way. Only thing left to do is to move forward, right?”

“And this is how you move forward?” She asked. “If anything, this is going back in time.”

“How long has it been since you made anything?” He asked her softly.

“I’m not trying to force you to do anything. I’m just saying the option’s there, if you ever wanted to pick it up again. You used to-“

“Quit trying to fix me!” She burst out. “I’m not your charity case! I bet this makes you feel good about yourself… go to hell, Micah!”

Cordelia managed to compose herself. “I have to go to work.”

She didn’t wait for a reply, leaving Micah in the shed.

The morning sun finally started to creep in as she approached the shop.

Not long till shorter nights, Cordelia told herself.